In order to improve the efficiency of domestic payments, Hungarian banks launched a local currency Instant Payment System (AFR) based on the Instant Credit Transfer Scheme ( ) at the beginning of last month. We interviewed Dr Levente Kovács, Secretary General of the Hungarian Banking Association, to shed light on this new service and its future.

First, could you briefly describe the main features of the Hungarian Retail Instant Payment System? Could you explain what led to the decision to develop this scheme in Hungary?

The Hungarian Instant Credit transfer scheme (AFR) was successfully launched on 2 March 2020. The idea of AFR came from the Central Bank of Hungary (MNB) which, in the role of catalyst, also developed the concept of the scheme. In the middle of the previous decade, the central bank created a strategy on payments and payment systems that includes the instant payments scheme as one of the domestic elements. Furthermore, this strategy aimed to develop and strengthen cashless solutions in finance, mainly for payments, through which we support the creation of space for different digital solutions. This meant decreasing the societal costs of payments, reducing the amount of cash in circulation, improving transparency in payments and ‘whitening’ the economy.

Following a three-month public consultation in 2016, the central bank made its decision on the implementation of the scheme and started to set up the countrywide project in partnership with the operator of the present retail payment systems, the clearing house GIRO Zrt, and 35 payment service providers ( ) on an obligatory basis.

The new core retail system allows instant credit transfer services but is also able to manage Requests To Pay (RTP) that are already optional for the scheme participants.

According to the scheme rules, a transfer is made available to the beneficiary within five seconds, and the amount credited in the account of the beneficiary is both irrevocable and immediately at the disposal of the account owner. If the transaction is rejected, a standard message is sent to the payer.

How will the AFR scheme be implemented – progressively or as a ‘big bang’? What channels and use cases will be targeted initially and over time?

Perhaps we can say that 2 March was like a ‘big bang’ because the instant credit transfer service with the different secondary identifiers was launched and the capability of the scheme engine to manage the RTP was also put at the disposal of scheme participants. This service is optional, unlike the credit transfers, which are obligatory if the amount does not exceed ten million Hungarian forints (thirty thousand euros) and does not have a definite execution date. The goal is to use AFR in as many payment situations as possible in order to replace the cash payments that count for about eighty percent of retail payments. At first, this means that private clients’ credit transfers are mainly initiated through their online banking services or mobile telephone applications whether they are single or a batch of instructions, while the single instructions of corporates are executed in the system. Later on, from September 2020, the corporate batches could also be sent via the system, even if there was a Transactions Per Second (TPS) limit of one. The RTP service is an option for which the can register and which is ready to process them. It should be said that the RTPs can be submitted to the Account Servicing Payment Service Provider ( ) not only directly but also indirectly via non- -type service providers. Later on, the set of secondary account identifiers will likely widen.

Could you share the major obstacles encountered by Hungarian when implementing the AFR scheme?

The Hungarian solution is unique due to its obligatory nature. In practice, it meant that 35 of different types and sizes had to prepare themselves for the launch.

The project demanded exceptional IT development for each in a relatively small market that was dealing with a bottleneck in the number of IT developers and suppliers.

What will be the main benefits for customers?

Perhaps the most important and useful benefit beyond the instant nature of the transfer is the continuity of the service, which is 24/7/365. This will significantly shorten the execution time.

It will imply new solutions at merchants’ stores if they start to use QR codes at cash desks. In these payment situations, the five second execution time can be very efficient for managing queues of buyers. Or one can make one-off transactions – e.g. to buy a house or car outside of the ’ former working hours. Hungarians often make these kinds of purchases at the weekend.

Finally, how do you see the AFR scheme evolving in the future? Do you think its participants will also join the scheme for euro transactions and, if so, when?

AFR is the core system we would like to replace the platforms of other retail clearing services in the future – i.e. also migrating the intraday platform with its ten cycles and the oldest system of the one cycle overnight system to this platform. When we designed the new system we kept in mind. This means that if the euro is adopted by Hungary, the system will be able to manage euro transactions via a simple change of the currency code. However, the date for this transition is currently unknown. Until then, of course, our individual participants are not restricted to adherence to on an individual basis. 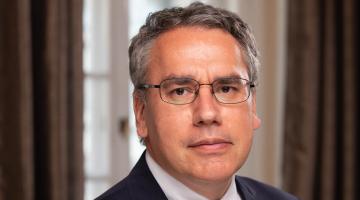 Levente Kovács holds degrees in economics (PhD, MBA), mathematics and physics (MSc). He is Secretary General of the Hungarian Banking Association, Professor of the International Finances Department at the University of Miskolc, Vice President of the Board of the Asian Financial Cooperation Association (AFCA, Beijing), Board Member of the European Money Markets Institute (EMMI, Brussels) and a Member of the Executive Committee of the European Banking Federation (EBF, Brussels). He is also a member of the Instant Payment Project Steering Committee, representing the banking sector.