Card Interchange Fees Regulation: What is the Right Question?

Card Interchange Fees Regulation: What is the Right Question?

In the context of interchange fees for cards: what is the exact market failure and is it sizeable?

Some may find it difficult to trust the judgment of academics when it comes to business models, including the notion of interchange fees, yet we can certainly heed their advice with respect to core principles: “Basic economics teach us that policy interventions must be grounded in a rigorous treatment of several questions: what is the exact market failure and is it sizeable? Does the state have the information and the instruments to correct the failure?”1 Let us then step back for a moment from the ongoing, often very emotional debate and look at the European Commission’s (the Commission’s) proposal to regulate card interchange fees through the prism of these two questions. (The proposal for a new Regulation on interchange fees (IFs) is included in the ‘related links’ below.)

First, what is the exact market failure and is it sizeable? When applied to the context of interchange fees for cards the question would translate into the working assumption that a high (or higher) level of interchange fee results in a low, (or lower, or even no,) acceptance of cards by retailers and merchants at point-of-sale. This assumption can be tested by using data from the Commission’s 2013 impact assessment (see ‘related links’ below) and the European Central Bank (ECB) 2012 statistical warehouse, and comparing the penetration of debit card transactions as a share of per capita non-cash transactions per European Union ( ) Member State with the average interchange fee for debit cards for the same Member State. The chart below (figure 1) shows that with the exception of Denmark, (the country with the lowest average interchange which features the highest share of debit card transactions, an exception often quoted by the Commission, although Denmark accounts for only 1.6 percent of the payments market,) in other Member States there is no correlation between the level of interchange and transaction market share of debit cards.

Figure 1: Comparing the penetration of debit card transactions as a share of per capita non-cash transactions per Member State with the average interchange fee for debit cards for the same Member State (source of data: Commission 2013 impact assessment accompanying the IF Regulation proposal, and ECB 2012 statistical warehouse – graph: European Savings and Retail Banking Group (ESBG)). 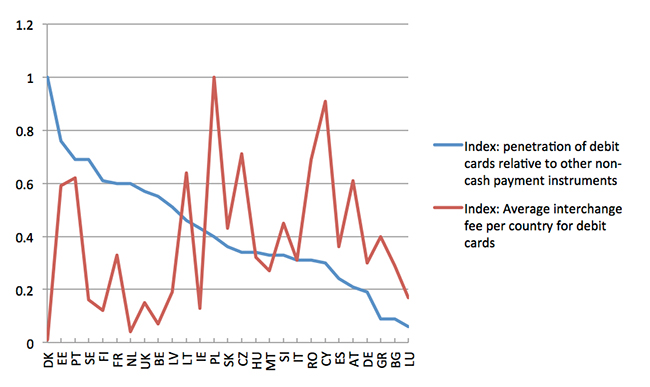 Does the European legislator have the information and the instruments to correct the alleged market failure?

Secondly, would the state – in this instance the European legislator - have the information and the instruments to correct the failure (which we must stress once again is far from demonstrated)? Now assuming on the basis of the evidence we have brought in the first part of this article that legislating away differences in interchange fees is not the solution, the question becomes whether legislation can be the instrument to harmonise the other factors hypothesised above (legacy legislation and practices for all payment instruments and their respective pricing or cross-subsidisation, market structure, the role of cash including the size of the grey economy, and consumer behaviour and preferences). This challenge can be sized by assessing how far apart Member States still are today in the use of non-cash payment instruments (on a per capita basis in order to neutralise population size). Again using trusted data (in this case for 2012 from the ECB statistical warehouse) the chart below (figure 2) shows for each Member State the either positive or negative ‘payment system efficiency’ gap compared to the ’s average for non-cash payment transactions per capita. The least one may say is that the differences between Member States are steep – over ten years into building the single market for payments - and the differences are increasing. This means that many variables would require adjustment to trigger convergence, a process which based on the experience of the past ten years is necessarily a very long one. The setting of a similar cap for debit card interchange applying across all Member States, for example, will have vastly different impacts not only on the use of debit cards, but also on other payment instruments, in each of the Member States. Unfortunately, no model has been formulated in the Commission’s impact assessment to gauge what will happen to such different payment systems (not even mentioning that the benchmark for the caps proposed by the Commission are point-of-sale transactions, also called ‘card-present’, although the proposed IFs Regulation is intended to apply to online transactions as well).

Is it still appropriate to try and build a ‘European payments legislation exception’?

Yet there is also a third, very nagging question. The interchange fee regulation debate, as with much of the payments legislation debate, tends unfortunately to take place in isolation from developments outside Europe. In today’s open world, where technological innovation pervades every human behaviour, is it still appropriate to try and build a ‘European payments legislation exception’? The answer to this question again resides in comparing, (on the basis of 2012 data from the Bank for International Settlements (BIS) and ECB statistical warehouse), for example the euro area’s payment system efficiency, (again expressed in non-cash payment transactions per capita), with those of the more innovative Organisation for Economic Co-operation and Development (OECD) countries outside Europe. The latter have been less encumbered by payments legislation. The chart below (figure 3) uses the euro area non-cash transaction per capita ratio as a benchmark and shows how many more such transactions are achieved in several OECD countries. The findings are unequivocal: there is 50 percent to 80 percent efficiency compared with countries such as Australia, Canada, the United States, and the gap is not closing. On the contrary, (except in the case of Canada,) it is widening. This leads one to wonder whether “true consumer protection” as envisaged by the Commission would not mean allowing the euro area to establish itself at the top of the league in payment system efficiency, thus delivering constant benefits to consumers, and enabling corporates and small and medium-sized enterprises, including retailers, to compete on the world scene.

Figure 3: Comparison of the difference in 2010/2011/2012 between non-cash payment transactions per capita for the United States, Australia, Canada, South Korea, Singapore and the Eurozone average (data source: ECB and BIS, 2012 – graph: ESBG). 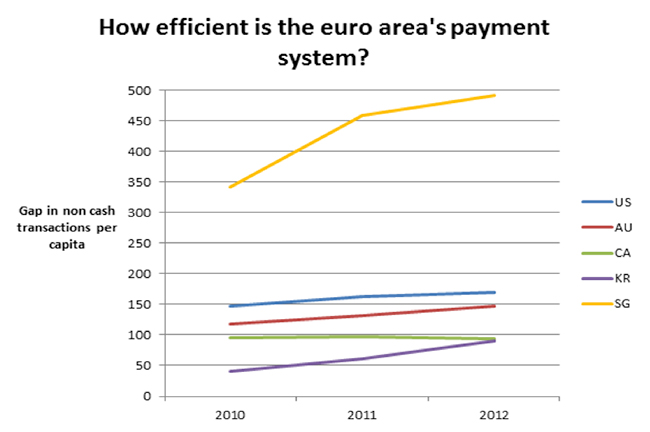 In the end, the decision about interchange fees is likely to be a political one. But the legislators who are about to make it should be aware of what a card interchange fee regulation may, or rather may not, achieve for the European citizen.

Norbert Bielefeld is Deputy Director - Payment Systems with the European Savings and Retail Banking Group (ESBG) and World Savings and Retail Banking Institute (WSBI). He is Chairman of the board of Trionis, a processing company. He serves as a member of various European Payments Council ( ) bodies including the Cash Working Group. The ESBG is a member of the . The views expressed in this article are those of the author and may not necessarily represent the views of all ESBG members.

Cross-border Interchange Fees: Why the General Court Got it Wrong in the MasterCard v. Commission Case. MasterCard is not an association of undertakings, and default settlement terms (including a default interchange fee - positive, negative or zero) is indispensable to the operation of the scheme ( Newsletter, Issue 16, October 2012)

On 24 July 2013 the European Commission (the Commission) published a ‘payments legislative package’, which includes the Commission proposals for a revised Payment Services Directive ( ) and a new Regulation on interchange fees for card-based payment transactions (the interchange fees (IFs) Regulation). The Commission stated that the IFs Regulation, “combined with the revised PSD, will introduce maximum levels of interchange fees for transactions based on consumer debit and credit cards and ban surcharges on these types of cards.” The Commission further commented: “The level of the interchange fees varies widely between the [European Union ( )] Member States, which suggests that they do not have a clear justification and create an important barrier between the national payment markets.” (Commission press release, entitled ‘New rules on payment services for the benefit of consumers and retailers’, 24 July 2013.) In this article, Norbert Bielefeld analyses the stated rationale (i.e. alleged market failure) for and the effectiveness of the proposed IFs Regulation to achieve the outcome (i.e. further integration of the payments market) pursued by the Commission. Taking into consideration relevant developments globally, this author concludes: card interchange fees do not cause market failure – at least as far as debit cards are concerned. If one truly wanted to pursue a ‘single market’ goal, which in this respect would translate into similar or at least more homogeneous usage rates for debit cards across Member States, one would have to look at a number of factors other than card interchange fees. 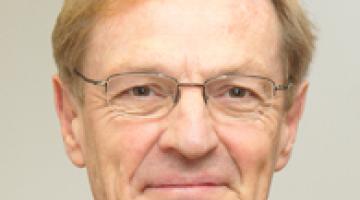