Challenges and Opportunities: 'The Social Media in Payments Report 201...

Challenges and Opportunities: 'The Social Media in Payments Report 2012'

Early findings from new research into the use of social media in the payments industry reveals an industry keen to try, but struggling to get the best results

The saying that a reputation takes years to build and seconds to destroy has become even more relevant in the social media era. Public engagement on open platforms, allowing for direct, and often more personal, interaction in real time, could be viewed as a risk rather than an asset in reputation management.  Therefore, it may seem surprising that so many companies have launched campaigns using what is now an essential digital channel for many marketing professionals. But with marketing budgets under pressure and the effectiveness of print and online media publications and traditional advertising diminishing, these early adopters, or social media pioneers, are helping to shape the future of communications and commercial marketing in the payments industry.

According to 'The Social Media in Payments Report 2012', a new study by Eurasia Insights analysing use of social media by the payments industry, it should be recognised that:

Today, there are a billion registered users on Facebook, 500 million on You Tube, 500 million on Twitter and 150 million on LinkedIn, to name just a few of the most popular networks. LinkedIn members share knowledge and insight in more than a million groups discussing specific subject matter. At the beginning of April 2012, there were approximately 715 LinkedIn groups related to payments; the twenty payments groups with the most followers alone have a combined membership of 288,118. More than two million companies have a LinkedIn company page.

'The Social Media in Payments Report 2012' reveals a sector that is eager to understand how to leverage the channel for commercial customers, but is uncertain about how best to go about it or monitor its impact. Despite the many barriers, however, there are some acknowledged success stories of companies which have managed to effectively integrate social media into their communication strategy.  The key is to identify a strategic and creative approach to ensure relevance for customers without veering into inappropriate informality.

Between November and December 2011, Eurasia Insights and Payments, Cards & Mobile carried out the payment industry's first dedicated study focusing on the use of social media for professional communications. 'The Social Media in Payments Report 2012', which will be launched in June 2012, combines the findings of an online survey of close to 200 payment market participants across Asia, Europe and the US with insights from industry leaders. Respondents to the survey represent, among others, vendors, software and system providers (28 percent), consultancies (24 percent) and banks (23 percent). Main findings of the survey, which have been published with the 'Social Media in Payments White Paper' (see 'related links' below), include:

Concerns: Respondents identified four key concerns with regard to social media engagement: customer privacy, lack of understanding of social media ('how does it work?'), resources including staff time required to build and maintain a continuous social media presence and company reputation.

Relevance and state of preparation: More than half of respondents feel social media is important or very important to their marketing strategy, while a further 22 percent say it is likely to be so in future. Additionally, 29 percent of respondents say that they already have a social media strategy in place for business to business communications with a further 27 percent in the planning stages.

These findings reflect that there are challenges when going social however, for those companies with the right strategy and perseverance, the opportunity to engage, influence, build loyalty and improve sales is real.

Figure 1: 'The Social Media in Payments Report 2012'. Question to survey participants: "Do you see any potential value in use of social media for your business?" 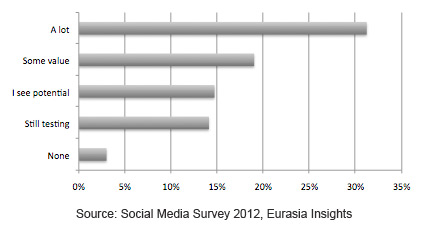 'The Social Media in Payments Report 2012' features case studies of successful social media campaigns executed by payments and financial services organisations. American Express, for example, makes use of the various social media platforms in multiple ways. In the US the company is dedicated to the concept of 'social currency' and has launched a range of promotions and products, including a networking forum to bring together small business owners and a range of online marketing tools to help small businesses make the most of their budgets. The firm has also launched a range of initiatives with Facebook, Foursquare and social games publisher Zynga, targeted at consumers. The firm is perhaps unique in the industry in its progress with integrating its social media activities with other emerging channels including mobile. The latest initiative is its 'Go Social' campaign, designed to help business owners create promotional offers which consumers can redeem using their smart phones.

Digital security firm Gemalto has also been actively using social media to communicate with customers and to spark conversations with technology start-ups developing mobile applications. The company has launched a technology that will enable Facebook to be available on almost any mobile phone, even where there is no subscription or data connection. Tim Cawsey, in charge of Corporate Communications and Social Media at Gemalto, says that it is important to take time to plan and create a social media strategy. Combining this with appropriate training for staff, will make the burden easier and ultimately improve a company's 'findability' and results in search rankings. Remarkably, nearly half of the survey respondents said they had no formal social media strategy for their business customers.

Other examples include BKM, Turkey's interbank switch organisation. It has no direct dealings with consumers but managed to attract over 100,000 Facebook followers within three months after the launch of a national campaign aimed at reducing the use of cash and driving use of electronic payments. A clear example of how some of the larger emerging markets are proving to be ahead of the game when it comes to social media use.

The use of social media is not without its pitfalls. It needs careful thought as well as ongoing analysis of how the output is consumed. There are well-publicised examples of how social media use can go wrong as a result of inappropriate language, posting of incorrect information or lack of relevance to the target audience. Leveraging the channel for commercial benefit is not the golden ticket it might seem. While social media sites are free to use, defining the messages and establishing a strategy that reflects corporate objectives, integrates with company activities and ensures appropriate approval or oversight procedures, can be complex and resource intensive. Not to mention maintaining a regular flow of messages so that a return on social media investment can be realised. Last but not least, processes need to be established which allow the company to respond appropriately - and fast - to public comment posted by followers on its social media platforms. 'The Social Media Report 2012' points out: a day in life is an hour (or less) on Twitter.

Jairson Vitorino, Chief Technical Officer at E.Life, a company which provides social media monitoring tools for business on the App Store, comments: "Analysis of brand presence on social platforms is an important avenue to refine the strategy. It is important however, to combine results identified through automated monitoring tools with human insight. Data without intelligent analysis has no positive effect on a company's social media strategy and might end up taking them in the wrong direction" he adds.

Do not be too afraid

The challenges for the socially uninitiated should not be a deterrent. Nearly 20 percent of respondents to the survey cited increased sales as a result of their social media activities. Social media sites are unique in their ability to establish direct communication with users, and unlike corporate websites, require messages that are both relevant and concise if they are to be effective. This alone has potential benefits both for company strategy - clarifying the company mission and product benefits - as well as communicating with staff. Add to that the opportunities for greater customer advocacy, improved market visibility and, ultimately, higher sales and it soon becomes obvious that social media is fast becoming an essential digital channel for both business to business and consumer communications alike.

The Social Media Report 2012 will be launched at The Social Media in Payments Briefing on 26 June 2012 in London. To register and for the full programme and list of speakers visit the event website

Between November and December 2011, Eurasia Insights and Payments, Cards & Mobile carried out the payment industry's first dedicated study focusing on the use of social media for professional communications. 'The Social Media in Payments Report 2012', which will be launched in June 2012, combines the findings of an online survey of close to 200 payment market participants across Asia, Europe and the US with the expertise of industry leaders. The report is designed to give an insight into the challenges, opportunities and successes of social media in the world of payments and retail financial services. The results reveal an industry split between those boldly embracing a new era of frequent, more transparent and often more personal communication, and those that are aware of social media but remain sceptical. In this article, Simon Hardie, Managing Director of Eurasia Insights, highlights the main findings of 'The Social Media in Payments Report 2012'. 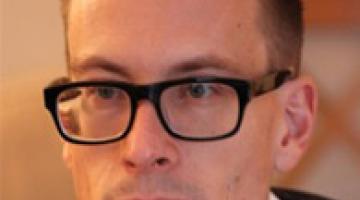