An interview with Sveinbjorn Snorri Gretarsson, executive director of payments at Islandsbanki.

Did you know that bank cards are ubiquitous in Iceland and that local banks are all involved in projects to increase public awareness on the importance of financial literacy? We interviewed Sveinbjorn Snorri Gretarsson, executive director of payments at Islandsbanki, to learn more about payments in his country. In addition, our infographic summarises all you need to know about the Icelandic landscape.

What are the current main features of the payment landscape in Iceland, and how has it evolved in the recent past?

The payments industry in Iceland is changing rapidly due to the introduction of new payment methods and new technology that has led to changes in our customers’ behaviour. Changes due to regulations are inevitable, and the focus on Application Programming Interface ( ) service in payments is more important now than before. A few years ago, our online bank was our biggest distribution channel. Now, the mobile app has taken the lead, and we anticipate even more traffic through that channel in forthcoming years. All Icelandic banks offer customers a wide range of cards and payments methods via their banking apps. One thing to consider, is that over ninety percent of Icelanders own a smart phone, and our customers prefer to do their banking via their mobile phone. The fintech market has also evolved in the last three to four years, and around seven to eight new players, both international and domestic, have entered the market. Those international players offer various payments solutions, and we also have domestic fintech players who offer lending via their apps, so the competition is increasing every year. 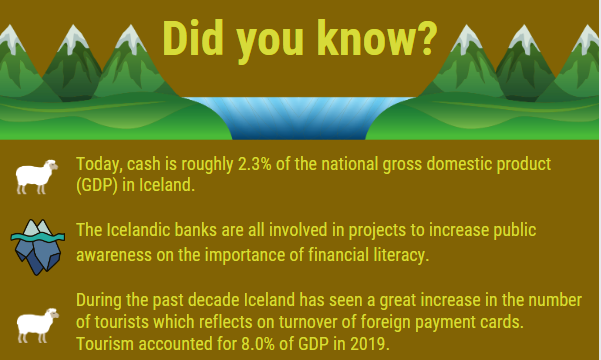 Icelanders are heavy card users. Can you tell us more about this phenomenon?

This phenomenon started in the early 1980s when the first credit card was issued by a group of Icelandic entrepreneurs. The first credit cards were issued in collaboration with Eurocard, and you could only use them domestically in the beginning. A few years later, VISA entered the market, and Eurocard became Mastercard, which helped the acceptance ratio. Icelanders have always been open to new things and are in general innovative, so they immediately welcomed the new payment option. Debit cards were introduced in 1993 and became very popular even though you could only use them at automated teller machines (ATMs), but that changed quickly, especially after customers demanded to use them everywhere.

I guess that no one anticipated that every Icelander would have at least two and a half plastic cards in their wallet by the early 2000s, but that is a fact.

Even though Icelanders are very open to new technology it helped hugely that fees on merchants were, from the start, lower compared to other European markets – plus Icelanders do travel a lot. The Icelandic currency is the smallest currency in the world, so it was very convenient to grab your card before you went abroad and still is, though mobile phones are now completely taking over. Today, cash is roughly 2.3 percent of the national gross domestic product (GDP), and we are certain that the ratio will drop further in the years to come.

What are the expectations for the development of instant payments (including Instant Credit Transfers – or – for euro payments) in Iceland?

So far, we haven’t seen strong customer demand for instant payments in euros, although that is likely to change. Domestic payments are all based on Icelandic Krona (ISK) and, because Icelandic banks are small, they all use large international banks as intermediaries for Credit Transfer ( ).  So it is up to each bank and its service provider to decide if and when they will provide the service.

We understand that Icelandic banks are all involved in projects to increase financial literacy. Could you tell us more about it and any aspects specifically related to payments?

We want to increase knowledge, skills and interest in finance by offering accessible and interesting information on finance, as education is one of the United Nations' Sustainable Development Goals on which Íslandsbanki places special emphasis. We have financial literacy events on a very regular basis where everyone who wants to know more about the topic is welcome. Last year, we had over seven thousand guests who listened to our lectures and over three hundred thousand viewed our financial literacy videos online.

On the payment aspect, we do offer seminars related to the online bank and banking app. We have visited retirement homes to educate and help them use other channels than branches for everyday banking ,and since Iceland has a large foreign workforce, we also provide education on the payments spectrum in particular.

Finally, a broader question: how do you see Iceland’s payment landscape developing over the coming five years?

After seeing the landscape change rapidly with new payment solutions like Apple Pay, Google Pay, Samsung Pay, Garmin and Fitbit, we could even see other big players entering the market. Amazon, for example, has recently introduced a new biometric device that will allow shoppers to pay at their stores with only their palm. Their palm would have to be linked with a card in the Amazon app. Therefore, it could be possible – within five years – that a customer does not even have to carry their wallet, cards nor mobile phone – they only need themselves. The Internet of Things (IoT) is on the verge on doing something spectacular. Since Icelanders are so tech thirsty, we could soon be able to order food or buy theatre tickets while driving and use our voice as a payment authentication. Thanks to these big players, we are getting closer to a new payment wave, and we will be ready to jump on board. But with new technology emerging, we unfortunately do see cybercrimes becoming more and more sophisticated, which means that banks need to step up their security protocols. The revised Payment Services Directive ( ) regulation will move the banks onto a more secure platform where the customer will need to use a two-factor authentication when accepting a payment transfer via the internet. Strong customer authentication ( ) will have a huge impact on helping the banks in the fight against cybercrime. 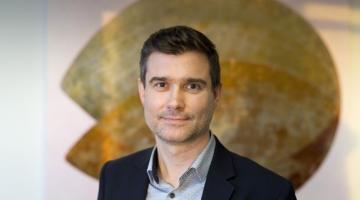 Executive director of payments at Islandsbanki

Sveinbjorn Snorri Gretarsson has been working in the payments industry for the past nineteen years. He started his career in issuing and processing at Kreditkort hf., the first credit-card company in Iceland. In 2007, he joined BYR Savings Banks, which was then later merged into Íslandsbanki, where he has been responsible for payments since 2013.