We continue our series of European payment landscapes with a profile of the Czech Republic. Czechs are frontrunners for contactless card payments and have the highest percentage of credit transfers in total non-cash payments in Europe. We interviewed Tomáš Hládek, Senior Executive at the Czech Banking Association, to learn more about payments in his country. In addition, our infographic summarises all you need to know about the Czech payment landscape.

In the Czech Republic, electronic payment instruments (cards and credit transfers) have gained importance over the years. How do you explain these changing payment habits?

The last 30 years brought not only changes in the political and economic system, but also a number of new banking services, new technologies and modern payment methods. Czechs are now enjoying an established market with the capacity for more growth and technological innovation. And Czechs like new technologies, so it is natural that we use them on a daily basis.

Moreover, the Czech Republic is one of the leading countries in Europe for contactless card payments. These have increased in number and quickly become the norm in the market since their introduction in 2011. Contactless payments represent approximately seventy percent  of all expenditures paid by cards in the Czech Republic.

Furthermore, according to European Central Bank (ECB), the relative importance of credit transfers in the Czech Republic is sixty-five and a half percent of the total number of payments (vs. twenty-four percent in the European Union (( ). This number is increasing every year and recently represented on average almost 172 credit transfers per person/per year (vs. 62.6 in the ). What about cash in the Czech Republic?

Despite the success of contactless card payments, cash is still used quite often, especially for low value payments. Unfortunately, the amount in circulation is still increasing, but this is mainly caused by very low interest rates, I think.

What are Czech expectations for the development of instant payments (including Single Euro Payments Area ( ) Instant Credit Transfers ( ) for euro payments)?

The Czech Instant Payments project, which covers domestic instant payments denominated in the Czech koruna, is in its final stage: all functions are described in a rulebook; their settlement has been solved. Three banks are already active, and the others are expected to go live during this year. Although banks must be mindful of the challenges ahead before entirely taking advantage of instant payments, embracing such innovations will be a crucial factor in meeting customers’ growing expectations for immediacy and for more secure and efficient payments.

As the euro is not our domestic currency and there are fewer cross-border payments denominated in euros, I would expect the realisation of the project to come later.

Finally, a broader question: how do you see the Czech payment landscape developing over the coming five years?

This is not a very simple question: new legislation, the revised Payment Services Directive ( ), allows for new types of services offered by bodies other than traditional banks. However, it is impossible to say that banks are not active and that they are not modernising and widening their services.

For example, with accelerated payments, banks now have huge opportunities to prove that payments can be innovative and follow the natural progression of the digital world.

In such a manner, we can expect a number of changes resulting in, I hope, less cash and higher-speed electronic transfers. 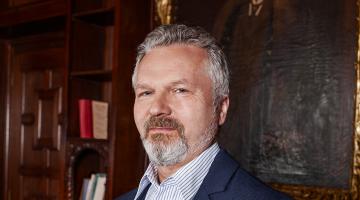 Mr. Hládek spent almost 30 years in the Czech central bank where he acted in different managerial positions (e.g. Executive Director of Cash and Payment Systems). In 2013 he moved to the Czech Banking Association, where he is the senior executive responsible for payment systems, cybersecurity, digitalisation and other technical issues.