Cross-border Interchange Fees: Why the General Court Got it Wrong in t...

Cross-border Interchange Fees: Why the General Court Got it Wrong in the MasterCard v. Commission Case

MasterCard is not an association of undertakings, and default settlement terms (including a default interchange fee - positive, negative or zero) is indispensable to the operation of the scheme

On 24 May 2012 in MasterCard v. Commission, the General Court of the European Union in Luxembourg (General Court) upheld the 2007 European Commission decision finding that MasterCard's fallback cross-border interchange fees (fallback IF) were in violation of competition law1.

This judgment is an important milestone in the over 20 year debate in Europe concerning the legality of fallback IF. The controversy is not over though, as the General Court's judgment is currently under appeal before the European Court of Justice (ECJ), the highest Court of the European Union. A ruling is not expected before 2014. Until then, MasterCard remains prohibited from applying the same level of fallback cross-border IF as those identified in the 2007 Commission decision - however MasterCard is allowed to apply lower levels which, according to the European Commission, fulfil the conditions for an exemption under the competition rules.

This article explains the issues presented to the General Court, and why MasterCard is of the view that the General Court erred in law. Before doing so, it is useful to recall the basic functioning of a four-party scheme and the role of the fallback IF in the operation of the scheme.

THE ROLE OF FALLBACK INTERCHANGE FEES IN PAYMENT CARD SCHEMES

Payment card schemes provide a payment service to two groups of customers, i.e. cardholders and merchants. Such service enables cardholders to make purchases from merchants, who typically receive virtually immediate and guaranteed payment on their account. In the case of a credit card, cardholders only pay for such purchases following an interest-free period or credit terms.

The typical payment transaction flows in a four-party card scheme and the role of the fallback IF are illustrated in the simplified diagram below: 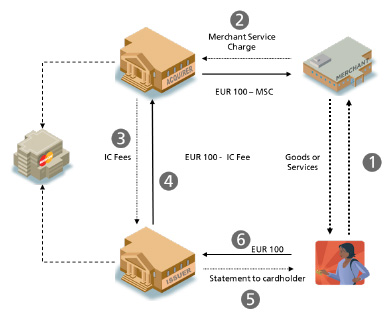 It is essential to understand that if a four-party scheme is to provide a payment card service to its customers, it must be capable of permitting: (1) the cardholder to purchase goods or services from the merchant; (2) the merchant to submit the transaction to the acquirer and to be paid for the amount of the transaction, less a merchant service charge (MSC); (3) the acquirer to submit the transaction to the issuer for settlement and to be reimbursed for the transaction amount, less the fallback IF; and (4) the issuer to collect payment from the cardholder for the purchases made (in the case of credit cards, after an interest-free period or potentially extended credit period)3.

MasterCard is a global payment scheme with thousands of licensees in Europe, acquiring millions of merchants and issuing cards to an even greater number of cardholders. When a cardholder goes to a merchant displaying the MasterCard logo on its door, the cardholder knows that he can pay with his MasterCard, and the merchant knows that it will be paid (even if it is eventually a fraudulent transaction or if the cardholder is insolvent). For a scheme to work with so many parties involved, and where it is practically unrealistic to have bilateral agreements between all acquiring and issuing banks, it is indispensable to establish fallback terms of dealings. In particular, this means determining the amount that the issuing bank must pay to the acquiring bank, i.e. the face value of the transaction (or "at par"), more than the face value of the transaction, or less than the face value of the transaction - which respectively mean a zero fallback IF, a negative fallback IF, or a positive fallback IF.

MAIN QUESTIONS BEFORE THE GENERAL COURT

(i)         Was the cross-border fallback IF a decision of an "association of undertakings"?

The General Court disagreed and found that even after MasterCard's IPO, MasterCard "seemed instead to be continuing to operate in Europe as an association of undertakings"4. According to the General Court, the existence of an association of undertakings resulted from two factors. First, MasterCard and its licensees shared a "commonality of interest" in a high IF. Second, the customer banks continued to exercise certain decision-making powers, for example in the setting of domestic IF. On that basis, MasterCard would remain an "institutionalised form of coordination of the conduct of the banks"5.

The ECJ's task on appeal will be to examine whether the General Court overstretched the concept of an association of undertakings. Such associations are typically trade associations controlled by their members. Their governing bodies are composed of representatives of their members who act in the interest of such members. None of these criteria apply to MasterCard. To the contrary, MasterCard, as a publicly listed company, is required to act in the interest of its public shareholders. The General Court clearly adopted a new approach to the notion of association of undertakings, going well beyond the limits of its definition to date, based on a very vague concept of commonality of interest. This could have wide repercussions beyond the payment card industry.

(ii)        Was the cross-border fallback IF restrictive of competition?

The General Court upheld the 2007 Commission decision's finding that the cross-border fallback IF's effect was to set a floor for the charges imposed by acquiring banks on merchants (MSCs), and thus restricted price competition between acquirers, to the detriment of merchants.

The General Court also concluded that MasterCard's cross-border fallback IF was not objectively necessary for the functioning of its payment scheme and therefore did not constitute an ancillary restraint. The General Court held that issuing banks had other sources of revenues than IF: even if the elimination of IF might result in a reduction of the benefits conferred on cardholders and the profitability of the issuing business, "it is reasonable to conclude that such a reduction would not be sufficient to affect the viability of the MasterCard system"6.

The General Court's position is that a four-party payment scheme can operate without a fallback IF and that the fallback IF is therefore a prohibited restriction on competition (which is eligible for an exemption provided that sufficient benefits are demonstrated).

This reflects a fundamental misunderstanding at the root of the dispute between the Commission and four-party payment schemes such as MasterCard and Visa. Through the fallback IF, MasterCard balances the interests of both cardholders and merchants so that each party pays its fair share of the costs for the benefits it receives. The fallback IF provides compensation to issuers for the benefits they provide to merchants, such as guaranteed payment (i.e. guarantee against fraud and against cardholder default). Without the fallback IF, the balance of interests between merchants and cardholders would be upset and tipped against cardholders who would have to pay the costs of services provided to merchants. It is remarkable that the European Commission and the General Court believe that issuers and ultimately cardholders should bear these costs. In essence, the Commission's approach, as endorsed by the General Court, is that issuers should provide services to merchants free of charge, and then either absorb the costs of these services or pass them onto cardholders.

The ECJ will have to examine whether the General Court misapplied the applicable legal test for establishing a restriction of competition. Under this test, as applied to date, if MasterCard's scheme would have been "difficult" to operate without the fallback IF, it should not have been found restrictive of competition. The new test used by the General Court, however, applied a stricter test of "viability".

The General's Court judgment is available from the Court of Justice's website: MasterCard v Commission - Judgment of European General Court of 24 May 2012

SEPA is Just a Piece in the Puzzle: Additional European Union Regulatory Initiatives Now in the Pipeline Will Have a Profound Impact on the Payments Market. European payments regulation is a moving target

2 Of course, some scheme  participants perform both issuing and acquiring functions.

3 By contrast, in a three-party scheme, the same entity traditionally acquires transactions, reimburses the merchant and collects payment from the cardholder - there is therefore no "explicit" IF. However, the European Commission recognised in its Green Paper "Towards an integrated European market for card, internet and mobile payments" that three-party schemes operate with an "implicit" IF.

In this article, Christoph Baert, Europe Region Senior Regulatory Counsel at MasterCard, sets out why the General Court of the European Union, in the MasterCard v. Commission judgment of 24 May 2012, erred in determining that MasterCard's cross-border fallback interchange fees (fallback IF) were in violation of competition law. The author recalls the role of the fallback IF, which are essential to a global four-party payment card scheme like MasterCard by serving as a key default term of settlement for the thousands of banks participating in this scheme across the world. MasterCard is of the view that the General Court's judgment regrettably erred in law regarding two key determinations concerning the fallback IF. First, it mistakenly found that MasterCard is an "association of undertakings" by over-reaching the established meaning of this concept, and second, it erred in finding the fallback IF as restrictive of competition, with the result that card issuers are expected to provide unremunerated benefits to merchants or recoup these costs from other parties which do not benefit from these services, i.e. cardholders.

The views expressed in this article are solely those of the author and should not be attributed to the European Payments Council; referral is made at the end of this article to the General Court May 2012 ruling on this subject. 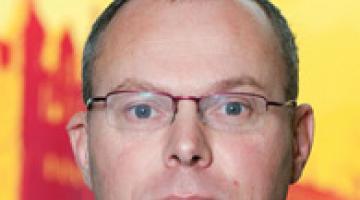