The Dutch payment landscape: One of the most cashless in Europe

The Dutch payment landscape: One of the most cashless in Europe

- The Dutch banking community is planning to deliver an instant payments infrastructure by May 2019. Can you tell us more about this project, its main features and the volume target by 2020? How does it relate to the Instant Credit Transfer ( ) scheme, scheduled to enter into effect in November 2017?

The instant payments infrastructure should, in principle, be able to support all payment products both single and batch payments, irrespective of their channels (e.g. mobile devices, internet, Point of Sales – POS - etc.) between all parties, whether consumer, business or government. As such it will cater for growth, both in volume and in value.

The infrastructure will be fully compliant with the Instant Credit Transfer scheme; and it will, in addition, have specific features related to supporting the Dutch ambition: i.e. no value limits, and a processing speed aimed at delivering the payment to the beneficiary within five seconds (vs ten seconds in the proposed rulebook). Also the Dutch interbank account switching service will be adapted to support instant payments.

Given the need to be able to support all market segments with this infrastructure, the ambition of the Dutch is to:

The volume target for 2020 is difficult to predict as the uptake will depend on the market, but the infrastructure is designed to support significant volumes (i.e. billions of payments).

- There is a growing trend in the Netherlands to switch from cash to card payments and other digital payment instruments. Some shops in the Netherlands do not even accept cash any longer! Has this shift been well received by customers? What would be the role of mobile payments in this context?

The payments industry and the retail community have the joint ambition to increase the share of cashless payments to 60 percent by 2018 (based on a Covenant between the retail organisations and banks). And we are well underway to reaching this goal. As cashless payments are more efficient than cash transactions (as well as safer and more convenient), all stakeholders endorse this goal. Although selected shops, petrol stations, railway stations and government services, each for their own reasons, have decided not to accept cash any longer, we do not foresee the Netherlands will evolve into a completely cashless society. In fact, the consensus is that the cash infrastructure will remain ubiquitous and that it is up to payers and payees to agree on their payment method.

Official cards-only decal for use at POI, available for merchants from the Dutch Payments Association: 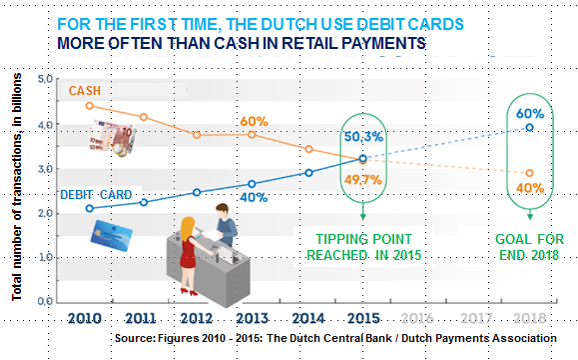 On the internet, the Netherlands is a frontrunner in the adoption of alternative (i.e. non-cards) payments. The favourite online payment method of the Netherlands, iDEAL, has in recent years seen a major uptake in use originating from mobile devices. Now iDEAL payments from mobile devices are also conquering the physical, face-to-face world of payments. We have introduced a QR code system that enables merchants and consumers to conveniently initiate iDEAL payments from a QR code that the merchant displays or generates. The system has seen its first successful deployment in a campaign for soliciting charity donations door-to-door. By using iDEAL QR donations are no longer limited by the cash people happen to have at hand when they are invited to make their donation.

- According to the latest European Central Bank’s (ECB) data available (covering the year 2014), card payments represent nearly 50 percent of total cashless transactions in the Netherlands ( average: 46 percent). They increased by nearly 10 percent between 2013 and 2014. How do you foresee the further evolution of card payments and contactless transactions in particular?

In fact, the more recent statistics in our possession (not yet published by the ECB) show that we already have more than 50 percent cashless retail transactions today. This threshold was passed in 2015. This is a significant step in the joint ambition of retailers and the banks to realise a 60/40 split in retail payments in the interest of payments efficiency and safety. We aim to reach the 60 percent cashless mark by 2018. Contactless transactions, as well as through smartphones, are already a big help in achieving this transition as they provide unparalleled speed and convenience for both consumers and retailers. 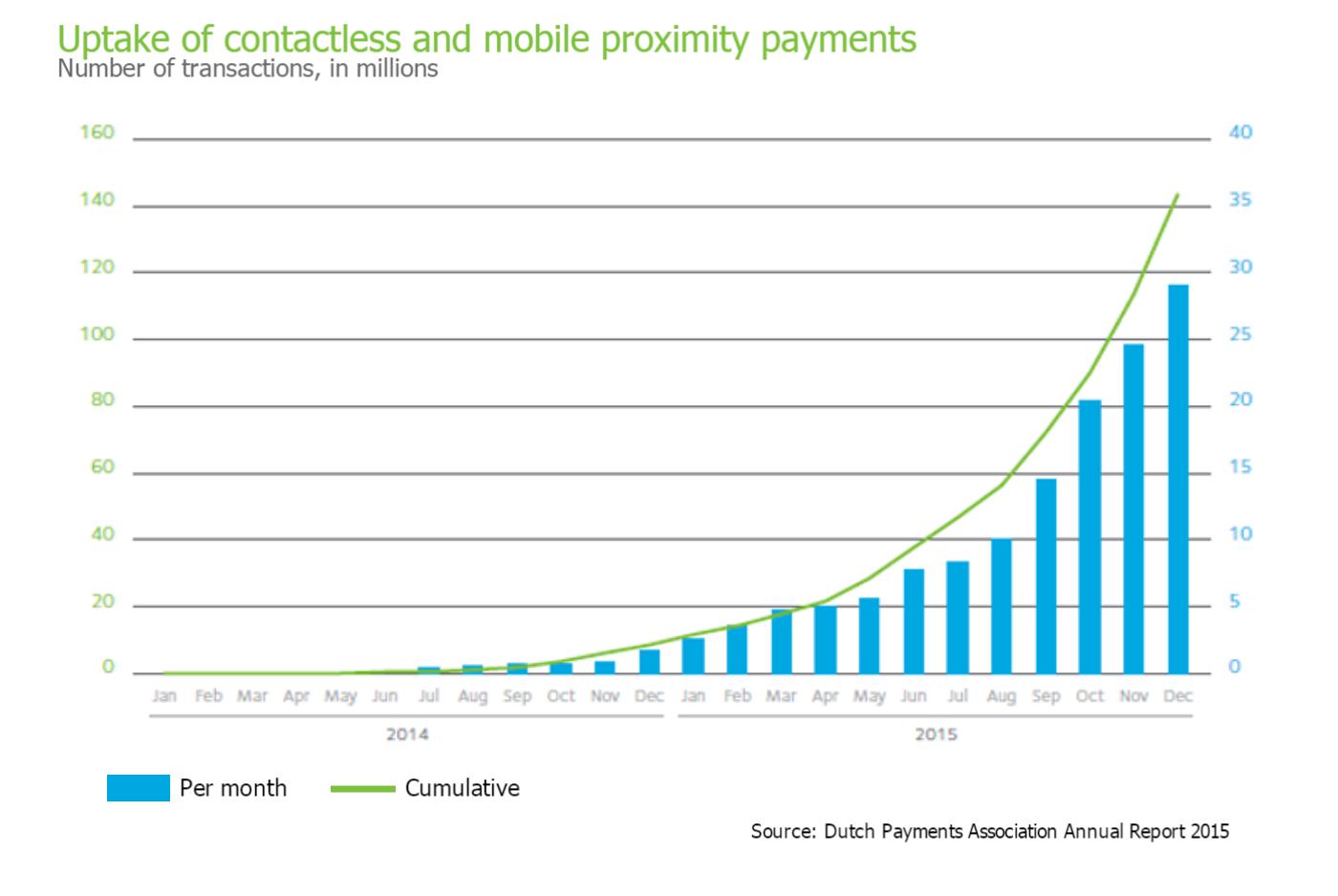 - What are the trends for direct debit which currently represents 18 percent of cashless transactions in the Netherlands ( average: 21 percent)?

I must admit that after the introduction of the Direct Debit ( ) to the Netherlands, we saw a slight decrease of processed direct debits. However, in the meantime, the numbers have recovered and are almost at pre- level again. The introduction of the rulebook compliant e-mandates solution in 2015 will, I expect, support the future use of direct debits even more. After a period of habituation, the market for using e-mandates now shows a substantial uptake. Direct debits are, and will remain, a very important payment instrument for both businesses and consumers as they are very effective and efficient.

- Could you briefly describe the Dutch multi-stakeholder model in the payments area and its main achievements and benefits?

Key to the Dutch approach is that we continually aim to align stakeholders and their interests in order to advance the payments infrastructure in the interest of society at large. The Dutch Payments Association acts as a platform for this alignment through our so-called Stakeholder fora resulting in shared visions that the association executes, together with our industry members. It is worth noting that, not only do we have credit institutions as members, there are also payments institutions and electronic money institutions. In that sense, we truly cover the full breadth of the supply side of the industry.

Other relevant bodies to mention here are the National Forum on the Payment System (MOB), chaired by the Central Bank, that reports to the Finance Minister on social implications of developments in payments, and the SBEB, the governing body for the Covenant that joins banks and retailers in the goal of promoting efficient payments in retail.

Together we are proud to have one of the most efficient, advanced and innovative payments markets in Europe. By member and stakeholder cooperation, joining forces and setting shared goals, we manage to continually improve the payments infrastructure, providing a solid basis for competitive offerings and customer satisfaction.

Infographic: the Dutch payment landscape at a glance:

In some European countries, it is not unusual to see a sign at the front door of small shops or restaurants warning the customers that only cash is accepted. Those who find this custom bothersome will rejoice in learning that, by 2018, the Netherlands is aiming for 60 percent of its retail payments to be cashless, and that some shops even display at their till a sign informing that only cards are accepted. Not only is the Netherlands striving for a more cashless society, and developing cutting-edge non-card cashless payment solutions, but it is also aiming to make all payments faster. We interviewed Piet Mallekoote, CEO of the Dutch Payments Association, to learn more about the Dutch ambition of developing a wide instant payments infrastructure that is able to cater for millions of transactions, by 2019. Piet also provides his insight on the other key trends of the Dutch payment landscape. In addition, our infographic gives you the key facts and figures you need to know about the Dutch payment habits.

Related Articles
SCT Inst consultation: A tremendous participation from payment stakeholders!
Discover the differing views of all interested parties on the future of the European market for retail financial services
Fourth Money Laundering Directive and revised Wire Transfer Regulation
The European Banking Authority launches public consultation on PSD2
What are the options for banks to prepare for their future?
Payment harmonisation in the Southern African Development Community (SADC) region
The ERPB recommendations to boost contactless payments in Europe are progressing with the publication of a new consumer leaflet
We bring you some of the best reports on payments published in the last quarter
Latest Insights
TPPs: latest views on PSD2 implementation
PSD2 implementation: challenges for ASPSPs
What’s next for RTP?
Greece’s steady progress towards a cashless society