The European Payments Council's 20th anniversary: the transformation of the European payments landscape

An interview with Javier Santamaria, Chair of the European Payments Council

This year is very special for the European Payments Council ( ), which celebrates its 20th anniversary. To mark this occasion, we have interviewed Javier Santamaria, who has been active within the since its creation in 2002 and became Chair in June 2012. We wanted to hear his thoughts on European payments and more particularly on the ’s key achievements, the digitalisation of payments and the payments future he envisages.

Q. You have been Chair of the since June 2012. How has the European payments landscape changed over the years?

First, in March 2012, came the Single Euro Payments Area ( ) Regulation, which was instrumental in the process as it set common rules and mandatory end-dates for the migration from legacy (national) euro payment instruments to credit transfer ( ) and direct debit ( ).

Second, the period between August 2014 (euro area) and November 2016 saw a full migration to the and schemes. Also, on the regulatory side, the progressive implementation of the revised Payment Services Directive ( ) issued in December 2015 further modified the European payments market, introducing several key drivers for change.

It is important to stress that the  data formats rely on the global open standard ISO 20022 developed by the International Organization for Standardization (ISO). ISO 20022 has become the common language of payments in Europe and the foundation of the migration to . The and European payment service providers ( ) have effectively pioneered the widespread adoption of ISO 20022, which is now also happening across the rest of the world.

It is worth reminding ourselves that on 1 January 2021, the United Kingdom (UK) left the Single Market and Customs Union (their ‘Brexit'). However, despite Brexit, UK will continue operating within the scope of the schemes as long as the UK continues to comply with the relevant scheme participation criteria that ensure a regulatory level playing field within .

In addition, over the past ten years, the European payments landscape has been shaped by a steep reduction in the share of cash in payment transactions and the emergence of mobile and instant payments. The COVID-19 pandemic has accelerated these trends.

In summary, we have gone through an unprecedented period of change of which we have not yet reached its end.

Q. Can you tell us about the most significant achievements of the since its creation in 2002 and, in particular, over the last decade

As I mentioned earlier, the significantly contributed to a successful migration to the schemes, which required substantial efforts on the part of European and other stakeholders (notably corporates, SMEs and public administrations). It also successfully launched the Instant Credit Transfer ( ) scheme in November 2017, by which euro credit transfers are completed in ten seconds – or fewer – across . The scheme continues to grow and, according to the latest data published in March 2022, now includes 2,343 from 26 European countries. They represent over sixty percent of European and more than seventy percent of in the euro area. Over ten percent of all euro credit transfers are now transactions. The regular evolution of the payment schemes is organised with the close involvement of a broad range of stakeholders to truly reflect market needs. In total, every year, over 43 billion payment transactions make use of one of the four payment schemes thanks to the support of some 3,900 who participate in one or more of those schemes.

Within the last three years, the has launched two payment-related schemes. First, the Proxy Lookup ( ) scheme, which aims to facilitate interoperability between Person-to-Person ( ) payment solutions by enabling the conversion of a proxy (i.e. mobile phone number or e-mail address) into a payment account identifier (currently an IBAN) across . Second, the Request-to-Pay ( ) scheme is a messaging scheme facilitating the initiation of credit transfer payments. The scheme is applicable in many sectors, covering a wide range of use cases and business models. The scheme can be considered a complement to the payment flow because it supports the end-to-end process and lies between an underlying commercial transaction and the payment itself. Like the other schemes, payment-related schemes need to evolve continually to meet market demand. The development and the take-up of those new schemes would not be possible without the active contributions of and other stakeholders.

This year, the is working on international euro credit transfers between and the rest of the globe and launched a 90-day public consultation on the [Instant] Euro One-Leg-Out Credit Transfer ([Inst] Euro OCT) arrangement rulebook, which aims to facilitate the processing of international (instant) credit transfers in euros between and non- countries.

Finally, the actively participates in multi-stakeholder bodies like the European Central Bank’s Euro Retail Payments Board ( ) and supports many of its activities. The also regularly establishes and facilitates multi-stakeholder groups to foster pan-European interoperability and standardisation in domains such as mobile payments, QR codes, Near Field Communication (NFC)and E-Invoice Presentment and Payment (EIPP).

From a qualitative perspective, I would say, also, that the most significant achievement of the is that it truly represents European payment service providers on payment issues and that it contributes effectively to the building of the future of payments in Europe. I must praise all those professionals, many of them anonymous, who have so generously taken part in the endeavour.

Q. What do you think about the digital transformation of payments: is it a threat or an opportunity for European ?

In recent years, there have been significant changes in the payments industry, notably the rise of instant and contactless payments, the acceleration of e-commerce, increased mobile usage and the impact of Open Banking.

New payment services and new players are emerging and developing. Obviously, European should be able to compete successfully by rapidly offering safe and convenient mobile, real-time payments to their customers as well as use of . It should be seen as an opportunity.

Cybersecurity should not be forgotten in this context, and the whole payments ecosystem consistently needs to address this risk as no ultimate victory can be claimed. This is why the considers the monitoring of security threats and fraud prevention to be critical on-going activities requiring the close cooperation of all industry actors – including public authorities.

Q. Finally, what do you see as the most likely drivers and facets of the evolution of European payments over the coming five years?

First, there are still some key open questions: will central bank digital currencies (CBDCs) (e.g. the ‘digital euro’) be implemented and, if so, what role will they play in European payments? What new payment-related legislative initiatives will be proposed by the European Commission, in particular, on instant payments and after the review of ? The public authorities have an important responsibility in shaping the European payments scene but this should be achieved in close cooperation with the private sector. The is willing to continue to play its payment harmonisation role in this context.

The conjunction of the growth of the use of mobile, wearable and connected devices and objects; the strategic importance of data (and data protection); the reduction of cash payments: the impact of application programming interface ( ) on payments; the emergence of new players and the expansion of e-commerce should reshape payment markets in the years to come and transform interactions between the various players. The end-users’ desire for speed, convenience, privacy, security and trust will drive the success of new payment technologies or methods.

Market evidence suggests that new payment methods like and other innovative payment solutions are being progressively developed and adopted. I believe that payments will, in the years to come, become faster, more mobile and even more ‘invisible’ as they increasingly get integrated into the economic transactions themselves. This will be especially true for smaller amounts.

What we can anticipate about the future of payments makes them more relevant than ever for the development of a digital society; hence making all those active in this field even more passionate about payments. 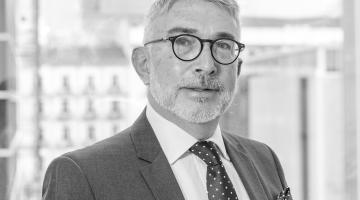 Javier Santamaría is the Chair of the European Payments Council since June 2012 and has been member of its Board since its creation in 2002. During decades as a bank employee, he accumulated a broad and balanced expertise in the intertwined dimensions of payments – business-related, operational, technical, regulatory – across different client segments and product lines, in the legacy and the innovative spheres, which he now further develops as an independent professional. He has been immersed in both cooperative and competitive environments. Besides payments, he is interested in other banking fields and continues to be actively engaged in academic matters. Mr Santamaría is also Chair of the Iberpay Board (Madrid), member of the Board of Directors at the Global Legal Entity Identifier Foundation (GLEIF, Basel-Frankfurt) and member of the Supervisory Board at Western Union International Bank (WUIB, Vienna). Former Head of Operations and Business Services, he was Senior Vice President at Banco Santander until December 2016. He was a member of the Board of the Euro Banking Association ( , Paris-Brussels) and of the Board of Directors at the Society for Worldwide Interbank Financial Telecommunication cooperative (SWIFT, Brussels) until the end of 2016.