While the average number of card transactions per capita and per year in the European Union ( ) is 90, it is only 50 in Greece, which places the country among the Member States most attached to cash. However, due to both government demands to reduce cash use in the country, and to the growing appetite of customers for alternative methods of payment, cash is slowly losing ground in Greece. We interviewed Vassilis Panagiotidis of the Hellenic Bank Association (HBA) to learn more about Greece’s progress towards a more cashless society, including its plan regarding instant payments.

Q. As part of its economic recovery plan, Greece recently set stricter payment rules. Can you tell us more about them? What is the concrete impact?

In June 2015, restrictions on capital transfers and cash withdrawals were imposed on the domestic financial system as a result of the government’s failed attempt to reach an agreement with its creditors regarding a third macro-economic adjustment programme. Against this backdrop, limits on cash withdrawals were imposed and capital transfers tightened.

Since then, the restrictions on capital transfers and cash withdrawals have gradually eased.

Nevertheless, the major effect of the aforementioned restrictions has been a gradual increase in the acceptance of e-payments (e.g. credit transfers, direct debits, card payments), as well as e-payments usage by consumers and firms.

In this regard, a new domestic law was adopted in December 2016 by which mandatory card acceptance for firms and sole proprietors (as of 27 July 2017) has been imposed and incentives for consumers to use e-payments are provided, including the establishment of a public lottery programme and tax deductions using electronic payment transactions.

Furthermore, there has been a sharp rise in the use of alternative bank customer service channels (internet, mobile, phone banking, Αutomated Τeller Μachines, Automated Payment Systems) over bank branches. According to data collected from Hellenic Bank Association (HBA) member banks:

Moreover, according to the recent Bank of Greece (National Central Bank) report on the Overview of the Greek Financial System (July 2017), the total number of payment cards issued has increased further in 2016, by five percent (compared with the respective total in 2015), to reach 15 million cards. The number of payment card transactions amounted to 513 million (up thirty-five percent on an annual basis) and the value of corresponding transactions reached fifty-five billion euros (up four percent on an annual basis). However, card usage is still much lower than in many other areas in Europe. We are currently running at 50 transactions per capita per year (2015: 13; 2014: eight) compared to the average of 90 transactions per capita.

Q. What is the main challenge for Greek businesses to implement this plan?

The main challenge for the implementation process for domestic firms in the field of electronic payments is the amount of investment needed to achieve the technical integration of their internal systems and processes, in order to streamline them in line with the current payment trends. On the other hand, if you compare this investment with the requirements for managing cash you come to the safe conclusion that it is worth it.

Q. What does this plan entail for Greek payment service providers?

The adequate supply of the domestic market with point-of-sale (POS) terminals for the purposes of complying with the provisions of the aforementioned electronic payment transactions law is a top priority for credit institutions, which represent the most significant payment service providers in Greece.

Furthermore, in April 2016 our member banks rolled out the MyBank internet purchases solution for their retail and corporate clientèle. From January 2017 to August 2017, MyBank has registered a remarkable overall increase of over eight hundred percent in terms of transaction values and a growing adoption rate among businesses operating in Greece. With a transaction authorisation rate of eighty percent, the average value of each payment made via MyBank is one hundred ninety-eight euros, while the payment with the highest value was over eleven thousand euros.

Last but not least, in May 2017 our member banks rolled out the IRIS online payments solution, which is an efficient instant payments tool (similar to the forthcoming Instant Credit Transfer ( ) scheme managed by the ) for their retail and corporate clientèle, and IRIS mobile payments, a mobile app for person-to-person ( ) and person-to-business (P2B) instant payments of up to five hundred euros per day per registered payer.

Given that cash is still the primary means of payment in Greece, the overarching goal of the domestic banking industry is the gradual reduction of cash usage by consumers and firms via the provision of incentives for the use of electronic payments solutions (e.g. through the expansion of e-payments loyalty programmes).

Q. The scheme, which will be operational in November, will be a relevant alternative to cash. Is the Greek banking community planning to adhere to the scheme?

Yes, there is intense interest in the forthcoming scheme. However, given that capital controls restrictions are still in place, this project is deemed important, albeit not a top priority. This is why ‘IRIS online payments’, the domestic solution dedicated for euro credit transfers, will follow all the key features of from 1 January 2018. 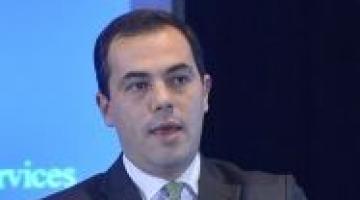 He regularly teaches at the HBA’s training body, the Hellenic Banking Institute (HBI).

He represents the HBA’s member banks in the committees and working groups of the European Banking Federation (EBF) and the .