Over the last five years, an evolution has taken place in Greece towards a more integrated retail payments market. While other traditional means of payment, such as cheques, declined significantly, electronic payment instruments and services gained importance. We interviewed Vassilis Panagiotidis from the Hellenic Bank Association (HBA) to learn more about Greece’s progress towards a cashless society.

In Greece, cashless payment instruments (in particular, card payments) have gained importance in recent years. How do you explain these changing payment habits?

Over the last five years there has been a marked push in Greece to facilitate the use of electronic payment instruments and services by all stakeholders involved (public and private sector, the state, the National Central Bank, banks, trade and consumer associations).

The key drivers of this tendency are the following: Greeks still rely heavily on cash payments. What is the estimated share of cash payments versus cashless payments, and how do you explain this relatively common use of cash?

Nevertheless, a large portion of everyday payment transactions are still conducted in cash. It is indicative that, according to a recent ECB Report, the number of cash payment transactions in 2016 was eighty-eight percent and their value was seventy-five percent of the total, while at the same time both the value of ATM withdrawals and the ratio of currency in circulation (CIC) vs. Gross Domestic Product (GDP) showed positive growth between 2012 and 2016 (seventeen point two percent, compared to the global average of nine point six percent). The key drivers of this are the following: What are expectations for the development of instant payments in Greece, including participation in the Single Euro Payments Area ( ) Instant Credit Transfer ( ) scheme?

In May 2017, HBA member banks rolled out the IRIS Online Payments solution, which is an efficient instant payments tool [similar to the scheme managed by the ] for their retail and corporate clientele, as well as IRIS Mobile Payments, a mobile app for person-to-person ( ) and person-to-business (P2B) instant payments of up to five hundred euros per day per registered payer.

In addition, there is genuine interest from our member banks in adherence to the scheme. This is why IRIS Online Payments, the domestic solution dedicated to euro credit transfers, will be aligned to all the key features of the scheme in the second or third quarter of 2020.

Finally, a broader question: how do you see the Greek payment landscape developing over the coming five years?

Given that cash is still the primary means of payment in Greece, the overarching goals of the domestic banking system over the coming five years are as follows:

1.The percentage of number of payments per capita Euro Area vs Greece. ECB Payments Statistics, July 2019 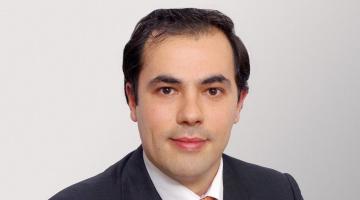 He represents HBA member banks in the committees and working groups of the European Banking Federation (EBF) and the European Payments Council ( ), of which he is a board member representing a coalition of members.