Next Generation SCT and SDD Rulebooks Will be Published in November 20...

Next Generation SCT and SDD Rulebooks Will be Published in November 2014 to Take Effect in November 2015. EPC Invites Suggestions for Changes by 28 February 2014

This article reiterates information first published in October 2013 with a related Newsletter article and Blog.

The European Payments Council ( ) launched the Credit Transfer ( ) Scheme in January 2008 and the Direct Debit ( ) Core and Business to Business (B2B) Schemes in November 2009. The Single Euro Payments Area ( ) payment schemes, as set out in the and Rulebooks, evolve based on a transparent change management process adhered to by the . This evolution reflects changes in market needs and updates of technical standards developed by international standards bodies, such as the International Organization for Standardization (ISO). The principles governing the evolution of the Schemes are set out in section three of the Scheme Management Internal Rules (see ‘related links’ below).

Since the launch of the and Schemes, the has generally published updated versions of the rulebooks and associated implementation guidelines once annually in November. These updated versions normally take effect in the third week of November of the following year. In accordance with industry best practice, all stakeholders and their suppliers therefore have sufficient lead time to address rulebook updates prior to such changes taking effect.

In February 2012, the European Union ( ) legislator, (i.e. the European Parliament and the Council of the representing Member States), adopted the ‘Regulation ( ) No 260/2012 establishing technical and business requirements for credit transfers and direct debits in euro’1 (the Regulation; see ‘related links’ below). This legislative act effectively mandates migration to and in the euro area by 1 February 2014. As communicated in June 2012, the therefore decided to postpone the effective date for the and Rulebook versions, which would normally have taken effect on 16 November 2013, to 1 February 2014. This allows market participants to adapt their systems and operations to comply with both the Regulation and the updated versions of the rulebooks.

The scheme change management process provides all stakeholders with the opportunity to participate; i.e. to introduce suggestions for changes to the schemes. All interested parties are invited to submit suggestions for changes proposed to be incorporated into the next version of the and Rulebooks using the template provided with the first ‘related link’ below. Suggestions for changes should be directed by email to change-request.EPC-scheme@epc-cep.eu by 28 February 2014. Any suggestions for rulebook changes can be sent to the prior to this date and will be taken into consideration for the November 2015 release.

All suggestions for changes to the rulebooks are evaluated by the Payment Schemes Working Group and are consolidated into a single change request document per rulebook. As with previous scheme change cycles, all proposed changes to the schemes will be released with the change request documents for a three-month public consultation (this time between May and August 2014; for details on previous consultations, refer to the link ‘ Consultations’ below).

Proposed changes to the schemes that find broad acceptance in the entire stakeholder community are taken forward. Proposed changes that lack such broad support are not – regardless of whether such a change is proposed by a payment service provider or by a user representative. This ensures that the and Schemes evolve in line with the requirements of the majority of all market participants. 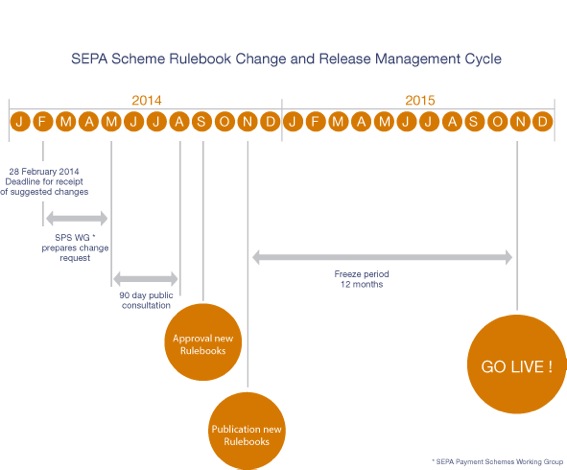 The and Schemes have to comply with the technical requirements detailed in Article 5 and in the Annex to Regulation ( ) No 260/2012, also known as the Regulation. Article 13 of the Regulation empowers the European Commission (the Commission) to amend the technical requirements set out in the Annex to the Regulation through delegated acts (see also Article 14). For more information, refer to the Newsletter article, entitled: ‘The New European Decision-Making Landscape: How the European Commission Rules Through ‘Delegated Acts’ (see ‘related articles in previous issues’ below).

The has stressed that any future changes to the Schemes mandated by the Commission should be based on adequate market consultation and reflect broad consensus among all stakeholders. The timelines for such amendments determined by the Commission to take effect should be aligned with the timelines governing the and Rulebook release schedule and the investment cycles of market participants. To date, the Commission has not made publicly available information around whether it plans to amend the technical requirements set out in the Annex to the Regulation, and if so, when this might happen.

It remains the ’s objective to ensure that the and Rulebooks evolve in response to proven market needs, based on a predictable release schedule. The must, however, clarify that moving forward, the may be required to adapt the rulebook release schedule at short notice to ensure compliance with technical requirements set out in the Annex to the Regulation as amended by the Commission.

Website: Template to Propose a Suggestion for a Change to the SEPA Credit Transfer or SEPA Direct Debit Rulebooks

University of Barcelona: “Early Migration to SEPA Has Led to More Agile and Effective Account Reconciliation and Faster Processing of Payments”. The University implemented SEPA Credit Transfer in 2008 and will complete migration to SEPA Direct Debit by the end of January 2013

1 The European Commission communicated on 9 January 2014 that it proposes to modify the European Union ( ) Regulation ( ) No 260/2012 to “give an extra transition period of six months during which payments which differ from the format can still be accepted” after 1 February 2014. In order for this additional transition period to become effective, this proposal introduced by the European Commission must be formally adopted by the co-legislators. This means: the European Parliament and the Council of the must take the necessary steps to modify the legal text of Regulation ( ) No 260/2012 currently in effect. (The Council of the is the institution where the Member States’ government representatives sit, i.e. the ministers of each Member State with responsibility for a given policy area.) The legislative process related to the proposal introduced by the European Commission on 9 January 2014 has not concluded at the time of publication of the Newsletter January 2014 edition.

As previously reported, the Credit Transfer ( ) and Direct Debit ( ) Schemes, as set out in the and Rulebooks, evolve based on a transparent change management process adhered to by the European Payments Council ( ). This evolution reflects changes in market needs and updates of technical standards developed by international standards bodies, such as the International Organization for Standardization (ISO). The next generation rulebooks and associated implementation guidelines will be published in November 2014. These rulebook versions will then take effect in November 2015. The scheme change management process provides all stakeholders with the opportunity to participate; i.e. to introduce suggestions for changes to the schemes. With this article, the emphasises again that all interested parties are invited to submit suggestions for changes proposed to be incorporated into the next version of the and Rulebooks by 28 February 2014. 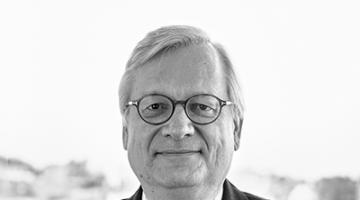