The and Schemes evolve based on a transparent change management process providing all stakeholders with the opportunity to introduce suggestions for changes to the schemes. The principles governing the evolution of the Schemes are set out in section 3 of the Scheme Management Internal Rules (see link below).

In consideration of the suggestions received, the Payments Working Group (SPS WG) develops a single change request per rulebook. The preparation of the change request involves analysis of the suggestions for changes received, including a cost-benefit analysis, dialogue with the initiator and, if appropriate, market research. Based on this analysis, the SPS WG decides whether to accept a suggestion for change into the change management process or not. Initiators of any suggestions for changes are notified of the decision taken by the SPS WG. All suggestions to modify the rulebook received by the - irrespective of whether they have been accepted into the change management process - are published on the website, permitting such a list to be openly viewed by all stakeholders.

The change requests will be released for a three-month public consultation in May 2011.

Taking into account comments received during the consultation, the SPS WG completes a change proposal for approval by the Plenary in September 2011.

To ensure planning security for all market participants, publication of new rulebook versions follows a predictable rulebook release management cycle. In accordance with best industry practice, payment service providers and their suppliers have a one-year lead time to address rulebook updates prior to such updates taking effect. The publishes updated versions of the rulebooks once annually in November of each year. The updated versions of the rulebooks then take effect in the third week of November of the following year to allow for alignment with SWIFT message releases. 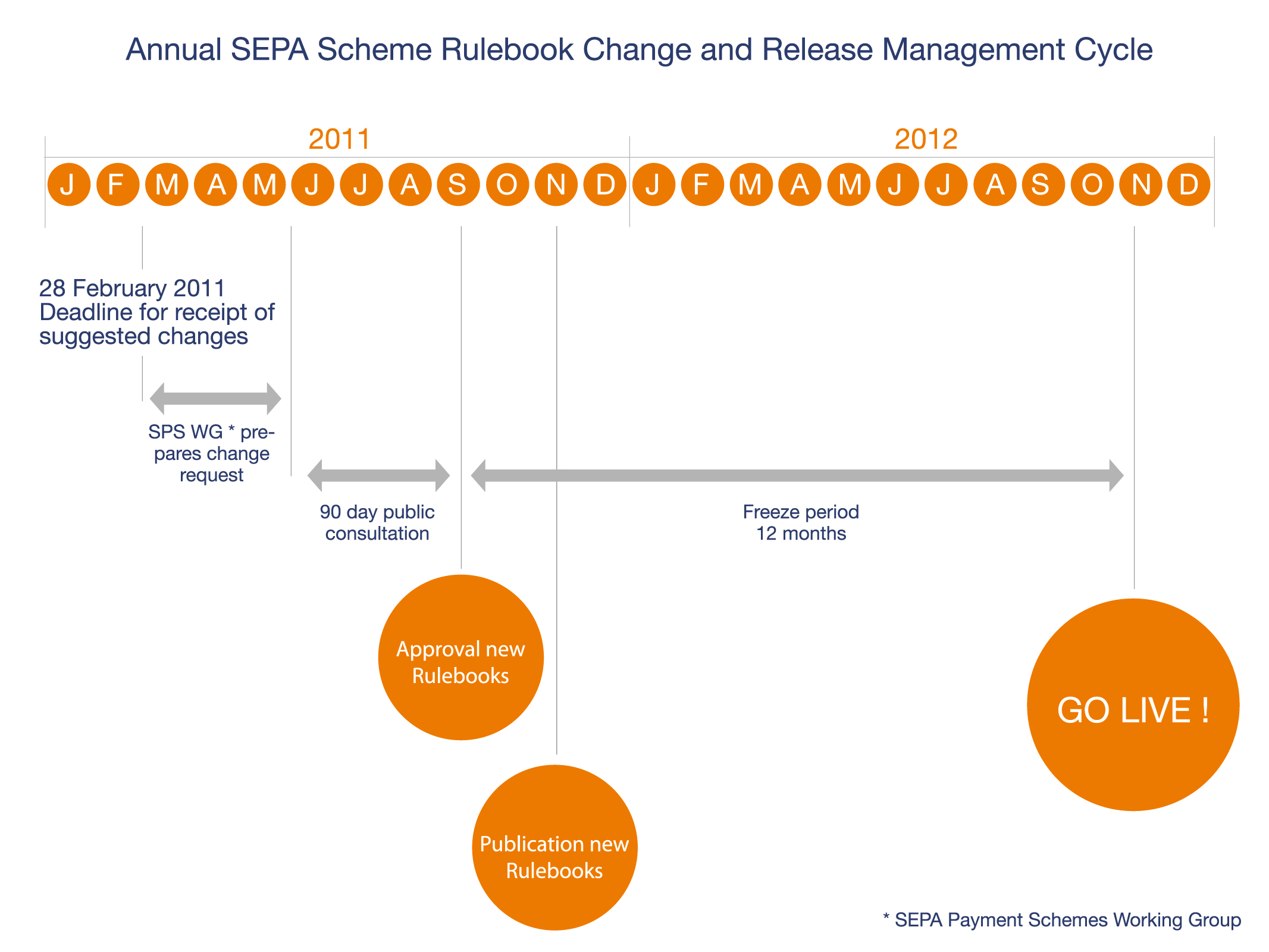 As a result of this annual change cycle, the and Schemes incorporate numerous features introduced by end users.

Deadline to submit suggestions for changes to the and scheme rulebooks is 28 February 2011.

Javier Santamaría is the Chair of the Payment Schemes Working Group.

The Good, the Bad, the Ugly and a Knight in Shining Armour? European Commission requests unprecedented powers to determine payment functionalities

So what's in a Name? Explaining payment schemes, instruments and systems. Clarity on payment terms is critical in the debate over the approach to setting end dates for migration to SEPA through EU Regulation (EPC Newsletter, Issue 8, October 2010)

The payment schemes developed by the European Payments Council ( ) in close dialogue with the user community evolve over time to reflect changes in market needs and updates in standards. Each scheme rulebook -  Credit Transfer ( ), Core Direct Debit and Business to Business Direct Debit ( ) - contains in Annex the Scheme Management Internal Rules which define the change management process applicable to the rulebooks. The first step in the annual scheme change management cycle is the introduction of suggestions for changes to the schemes by any interested party. The invites stakeholders to submit suggestions for changes to the by 28 February 2011 (a link to the relevant documentation is included at the end of this article). Javier Santamaría explains the process.

Related Articles
Update EPC Plenary Meetings
Your Points of View
Work in Progress
Building a Single Market for e-Commerce Payments***
Happy New Year?
The King is Dead, Long Live the King
Reaping the Benefits of Electronic Invoicing for Europe
Facing the Facts in January 2011
More Market Integration
The Good, the Bad, the Ugly and a Knight in Shining Armour?
The Breakthrough for SEPA?
Best of Class: the Netherlands
How to Migrate to SEPA
Latest Insights
TPPs: latest views on PSD2 implementation
PSD2 implementation: challenges for ASPSPs
What’s next for RTP?
Greece’s steady progress towards a cashless society