The  Credit Transfer ( ) and Direct Debit ( ) Schemes, developed by the European Payments Council ( ) in close dialogue with the payment service user community, evolve over time. The annual scheme change management process is based on the following principles:

In February 2012, the European legislator adopted the 'Regulation ( ) No 260/2012 establishing technical and business requirements for credit transfers and direct debits in euro and amending Regulation (EC) No 924/2009' (see 'related links' below) (the Regulation), which defines 1 February 2014 as the deadline in the euro area for compliance with the core provisions of this Regulation. Effectively, this means that as of this date, existing national euro credit transfer and direct debit schemes will be replaced by and .

The Regulation stipulates the timelines for application of the so-called 'International Bank Account Number (IBAN) only' rule. This provision is relevant for both payment service providers ( ) and payment service users ( ). Article 5 (7) of the Regulation states: "After 1 February 2014 for national payment transactions and after 1 February 2016 for cross-border payment transactions, shall not require to indicate the BIC (Business Identifier Code) of the of a payer or of the of a payee." Article 16 (6) however, provides European Union ( ) Member States with the option to defer application of the 'IBAN only' rule for national transactions to 1 February 2016.

The updated versions of the Rulebooks have been amended to make it optional to provide the BIC of the payer's bank with the mandate1 except if the mandate is issued in an Member State which opts to make use of the derogation permissible under Article 16 (6) with regard to national transactions2.

The updated version of the Rulebook was also amended to specify that the BIC has to be provided in line with the provisions of the Regulation.

New elements introduced into the Rulebook

To further improve straight-through-processing (STP) of payments, the Rulebook version 7.0 includes two additional reject reason codes which specify why a payment was not accepted:

New elements introduced into the Rulebooks

The Rulebook version 7.0 and the Rulebook version 5.0, have been updated to clarify that, subject to national legal regime, it is permissible to store mandates in digitised form and the use of electronic signatures is allowed under the Schemes.

As was done for the Rulebook version 7.0 (see above), the updated versions of the and Rulebooks have been enhanced to include these two additional reject reason codes:

In addition, the Rulebook version 7.0 was amended as follows to include a specific scheme rule in case of a card data generated mandate (CDGM) as per the Regulation's Article 5 in conjunction with its Annex paragraph 3 (a)(iv): "In case of a mandate generated using data from a payment card at the point of sale which results in a direct debit to and from a payment account, and where the name of the Debtor is not available, the attribute 'name of Debtor' must be filled in with 'CDGM', followed by the card number, the sequence number and the expiry date of the card or, if these data elements are not available, by any other data element(s) that would uniquely identify the Debtor to the Debtor Bank."

Updated implementation guidelines will also be published in November 2012 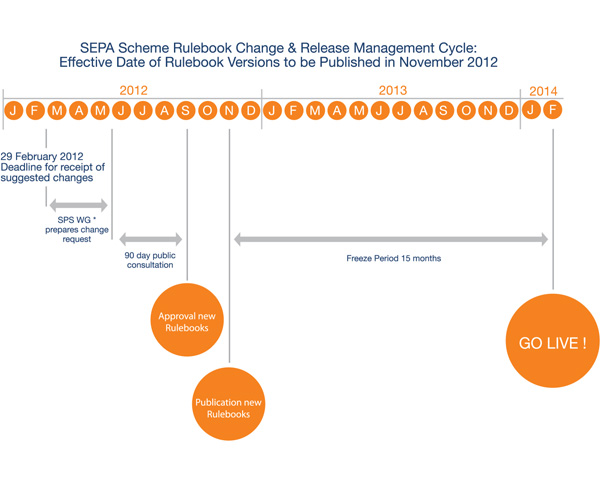 stakeholders however, are currently working towards achieving compliance with the Regulation, which defines 1 February 2014 as the deadline in the euro area for compliance with the core provisions of this Regulation. As a result, and as communicated in June 2012 (see 'related links' below), the decided to postpone the effective date for the Rulebook version 7.0, the Rulebook version 7.0 and the Rulebook version 5.0 and associated , from 16 November 2013 to 1 February 2014. This allows market participants sufficient time to adapt their systems and operations to comply  with both the Regulation and the updated versions of the rulebooks.

The experience of early movers handling major payment volumes indicates that migration to Schemes and technical standards is beneficial but requires careful planning. Organisations which still have to adapt systems and operations to achieve compliance with the Regulation by 1 February 2014 must become active immediately. The relevant actions and resources should be identified now. The makes available comprehensive information to help market participants manage the transition. These sources are included with the 'related links' at the end of this article (refer to the ' Migration Tool Kit').

José Vicente is the Acting Chair of the Payment Schemes Working Group.

Time is of the Essence: Get Ready for SEPA. Act Now! Market participants in the euro area must achieve compliance with the core provisions of the European Union Regulation (EU) 260/2012 by 1 February 2014

1 A mandate is signed by the payer to authorise the biller to collect a payment and to instruct the payer's bank to pay those collections. The mandate can be issued in paper form or electronically.

2 European Union Member States must notify the European Commission of the derogations that they intend to use by 1 February 2013 (see Article 16 (7) of the Regulation ( ) No 260/2012 establishing technical and business requirements for credit transfers and direct debits in euro and amending Regulation (EC) No 924/2009.

3 The technical terms used in the Direct Debit Rulebooks refer to the payer as 'debtor' and to the biller as 'creditor'.

This article was updated on 30 November 2012 to reflect an amendment to the wording with regard to card data generated mandates introduced with the Direct Debit ( ) Core Rulebook version 7.0.

In November 2012, the European Payments Council ( ) will release updated and enhanced versions of the Credit Transfer ( ) and  Rulebooks and associated implementation guidelines. As previously reported, the decided to align the effective date of the rulebook versions - to be published in November 2012 - with the 1 February 2014 deadline mandated for the euro area by the European legislator to comply with the core provisions of the 'Regulation ( ) No 260/2012 establishing technical and business requirements for credit transfers and direct debits in euro' (the Regulation). In this article, José Vicente outlines the new elements incorporated into the next generation and Rulebooks. Payment service providers participating in the and Schemes are reminded that the rulebook versions and implementation guidelines, published in November 2011, take effect on 17 November 2012. The author also invites organisations, which still have to adapt systems and operations to achieve compliance with the Regulation by 1 February 2014, to become active immediately. The relevant actions and resources should be identified now. The makes available comprehensive information to help market participants manage the transition. These sources are included with the 'related links' at the end of this article (refer to the ' Migration Tool Kit'). 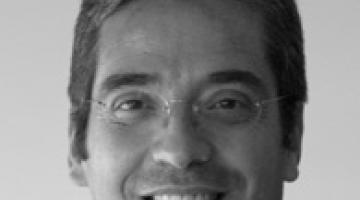