An interview with Roman Hains, EPC Board Member representing the Slovak and Czech Banking Associations

We continue our series of European payment landscapes with a profile of Slovakia. This Eastern-European eurozone country has a binary cashless payment system using mostly cards and credit transfers. We interviewed Roman Hains, Slovak Board Member, to learn more about the payment specifics of his country. In addition, do not miss our infographic presenting the key facts and figures of the Slovak payment scene.

Q. The cashless payment landscape in Slovakia clearly revolves around two main methods of payment, card and credit transfer, which each represent nearly half of all cashless transactions. Can you tell us more?

Contactless functionality is currently standard in the Slovak market and is offered automatically by shop cashiers.

The high ratio of credit transfers on cashless payments results from the traditional way of making payments in Slovakia and is partially connected to the decreased use of direct debits that followed the replacement of domestic direct debits/collections by Direct Debit ( ) in February 2014.

Contactless usage is supported not only by standard plastic cards but also by innovative products. For example, the ‘sticker’ is a small payment card which can be used for contactless payment only. Mobile payments also have extremely high potential to grow. Only two banks on the market currently provide host card emulation mobile payments. This mobile payment is made with the mobile phone on a POS terminal through near-field communication (NFC). In the future we can expect this type of payment to grow further and replace a significant number of cash payments and partially cashless payments initiated by traditional ways, e.g. paper based payment orders via bank branches and some other electronic channels.

Q. On the contrary, direct debits get a minor share of Slovaks’ cashless payments, with just 3.6 percent of all cashless transactions (versus over twenty percent in the European Union). How do you explain this characteristic?

Prior to February 2014, the ratio of domestic direct debits and credit transfers was about twenty and eighty percent. Currently, the ratio is about seven to ten percent and ninety to ninety-three percent. The main factor is that domestic direct debit was formerly based on debtor mandate flow with minimum risk for debtors, creditors and banks. Despite a information campaign supported and implemented by banks, government and public sector prior to 2014, the in Slovakia are generally considered less safe for the general public than the old domestic direct debit system. Furthermore, the risk appraisal run by the banks caused a significant decrease in the number of creditors. Standard creditors are big corporates (mainly telecommunications, energy suppliers, household services providers), small companies and a very small number of private individuals.

Q. What about cash in Slovakia?

The trend over the last four years shows that the amount of cash is slightly decreasing. People are starting to use other payment methods (cashless payments and card transactions). In 2016 the volume of cash withdrawals declined by 1.19 percent and the number of withdrawal transactions declined by 4.88 percent compared to 2015.

Q. As Slovakia is part of the eurozone, payment service providers might be interested in participating in the Instant Credit Transfer scheme. Is the Slovak community making plans to join?

We are currently in the position of observers. So far we do not have an action plan at our association level. 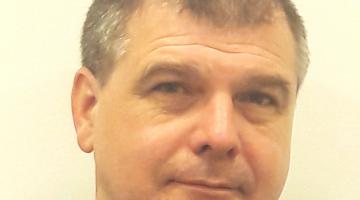 Roman Hains is responsible for bank operations for VUB Banka (a member of Intesa Sanpaolo group).

He covers payments for the Slovak Banking Association and has represented his community in the since 2010.