We interviewed Kris De Ryck, CEO of Batopin to learn more about the Batopin initiative in Belgium and what were the key drivers for such a decision.

Could you please give us some details about the Batopin Project - a new network of bank neutral ATMs in Belgium – and the progress of its deployment?

Batopin is an initiative from the major banks in Belgium: Belfius, BNP Paribas Fortis, ING and KBC. Batopin was created in early 2020 with the goal of building a new network of neutral ATMs, separate from their own bank branches, covering the entire country. In sync with the deployment of the new network, the banks’ own-branded ATMs will be gradually phased out by the end of 2024.

With a bank-independent network of ATMs, Batopin aims to optimise access to cash in Belgium. A well-balanced network takes into account where people live and work, where they use cash and how they move around. Batopin's new CASH points will be located in places that people intuitively feel to be the 'right' places where to withdraw or deposit cash. In short, the right number of ATMs in the right places.

The first 6 Batopin CASH points became operational in September of this year. The construction of the new cash network will be fully completed by the end of 2024. Each new CASH point is selected after thorough analysis weighing up all the critical elements: geography, demographic factors, local needs, actual figures of cash use in the neighborhood, and so on.

The Batopin website (batopin.be) allows you to follow the growth of the network week after week, showing both the CASH points that are already operational, as well as those that will soon be installed.

What were the key drivers for such a decision? What are its main implications and benefits for participating banks and their customers?

The use of cash in Belgium has been in decline since 2012. At the same time, the success of card payments and digital banking has also led to a reduction in the number of bank branches. This dynamic causes imbalances in the ATM-coverage of the Belgian territory, as the ATMs in the country are mainly linked to bank branches:

-    On the one hand there is a concentration and overcapacity of ATMs: 88% of the ATMs operated by the major banks are located less than 1 kilometer from each other, and half of them are barely 111 meters away!

-    On the other hand, in the places where people really need and use cash, there is a lack of ATMs.

The Batopin project is how the four major banks are answering this structural problem. The advantage of neutral CASH points is their independence regarding any bank branch: their location can be chosen based on real cash needs only.

Batopin builds its new network from scratch, based on a customer-centric approach. We take into account the new ways of living and, most of all, commercial activities with intense cash use, which are the main driver to select the Batopin ATM locations.

In short, Batopin aims to offer a smarter, more balanced access to cash over the entire Belgian territory.

What is the state of cash in Belgium today and its expected evolution over the coming five years? How will Batopin help fulfil end-user cash needs?

A cashless society is still a step too far. But it is time to rethink and rebalance our infrastructure, not to the needs of a cashless society but rather a ‘less cash’ society. And that is exactly what Batopin is about! 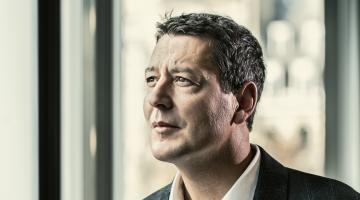