An interview with Pilar Clavería, Senior Payments Advisor at the Spanish Banking Association

Even if cash is still king in Spain, representing an estimated 80 percent of the total number of retail transactions, innovative methods of payment are advancing in the country. Spain is a frontrunner for instant and Person-to-Person ( ) mobile payments. Another electronic instrument, Direct Debit ( ), is also popular. We interviewed Pilar Clavería, Payments Advisor at the Spanish Banking Association and member of the General Assembly, to learn more about payments in her country. In addition, our infographic summarises all you need to know about the Spanish payment landscape. Q. Spain will be among the first euro countries to offer the Instant Credit Transfer ( ) scheme to customers. Can you tell us more about the implementation of the scheme in your country? How is it related to the development of mobile payments?

Once was achieved, the Spanish banking community started to think about the future of retail payments. By that time, there was a need for instant payments and in particular for payments to be initiated anywhere at any time. In other words, the banking sector faced the challenge to develop a solution for customers in the digital and mobile world.

We defined a two step approach to an instant payment service proposition:

Around 80 banks plan to offer from November 2017 onwards.

Q. The Spanish rely heavily on card payments (they represent forty-six percent of all cashless transactions, a level almost identical to the European Union ( ) average). Where do contactless card payments stand?

The main reason for this increase is market maturity. Even though the technology was already in place (with a large number of contactless terminals and cards available), retailers continued for a period of time to slot cards into payment terminals for each transaction. After a while, retailers and customers discovered contactless, keeping payments secure and therefore maintaining confidence in the system. Customer experience improved at the same time.

Q. Direct debits are quite popular in Spain. How do you explain this popularity?

Direct debits represent one third of the cashless transactions in Spain (which makes Spain the second largest country in Europe in relative terms for direct debits. Germany is the first. The average is twenty-one percent). The average amount is 250 euros.

The most relevant characteristic of this product is its convenience for payers, since the initiative comes from the payee and it is flexible enough to cover many business scenarios at the optimal convenience of users.

In addition, they are also used for many B2B one-off transactions.

To understand the success of direct debits in Spain, we have to go back to the late 1950s when companies regularly took customers’ paper chits to banks where the amount was to be debited from their customer’s account. Once the debit was made, banks attached the payment notice to the chit and sent it to the debtor. The remaining chits were sent to other banks for collection and clearing whenever needed.

Creditors had an interest in setting up direct debits, so they could avoid paying ‘collection agents’ who went door to door, and debtors favoured direct debits because they no longer had to remember to make payments and therefore avoided losing access to the services they needed.

Later the process became popular; it was standardised and paper was replaced by electronic collection. Nowadays SDDs, either as Direct Debit Core or Direct Debit Business to Business, have filled the gap.

Q. How important is cash in Spanish payment systems and what is its expected evolution?

There are no official figures on the use of cash but it is estimated at around eighty percent of the total number of transactions, at least of those relating to daily expenses.

It is important to stress that the use of cash corresponds mainly to people’s payment habits, and these do not change very rapidly.

E-commerce, mobile payments and the revolutionary digitalisation of payments services are the main catalyst for the reduction in cash transactions.

This trend is already visible in a few basic indicators, such as Point of Sale (POS) transactions vs Automated Teller Machine (ATM) cash withdrawals. The former have increased by around thirteen percent since 2015 while the latter are flat. And now, for the first time ever, the value of POS transactions has exceeded the value of ATM withdrawals.

This tendency is expected to accelerate in the short term. In fact, the reduction of cash transactions is one of the main anticipated effects of the launch of Bizum. 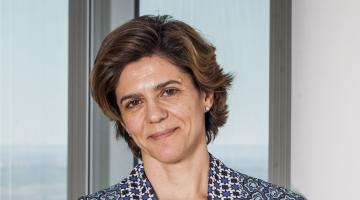 Since September 2008, Pilar Clavería is the Payments, Operations and Procedures Advisor at the Spanish Banking Association. Currently she is Member of the General Assembly; Member of the Payment Systems Committee of the European Banking Federation and of the Group of Experts on Payments’ Regulation. She is also Member of the National Payments Committee.

From 1992 to September 2008 she held different positions of responsibility at Banco Popular Español Group.