Spunta Banca distributed ledger technology (DLT) is a project promoted by the Italian Banking Association (ABI) and coordinated by ABI Lab. It has been fully operational for the interbank reconciliation process since last October. With this project,  ABI aims to truly bring blockchain into the Italian banking sector. We interviewed Silvia Attanasio, ABI's Head of Innovation, to learn more about this project, its achievements, benefits and the lessons learned to date.

First, how would you describe Spunta?

Spunta is all about co-opetition. As a project, it has been an incredible experience of distributed governance, cooperation among people of good will, widespread innovation, and a strong, common vision of the future role of the distributed paradigm.

Looking at the banking process, Spunta is about the reconciliation of bilateral accounts (rather like nostro and vostro accounts) generally run by back offices that aim to clear every mismatch in double-entry book-keeping. After the automatic matching, the operators deal with the suspended transactions, i.e. the operations that need to be confirmed before being registered in the correspondent account. The implementation of a blockchain-based process using DLT for interbank reconciliation in Italy makes it possible to automatically detect non-matching transactions using a shared algorithm. Moreover, it leads to the standardisation of both the process and the single communication channel and provides a comprehensive view of the transactions among the interested parties. As a consequence, the principles of the new Spunta project envisage full visibility of transactions, including those of the counterparty; rapid management of flows with daily, rather than monthly, reconciliation; shared rules for the symmetrical reconciliation of transactions between counterparty banks; and the integrated management of communications and processes in the event of an imbalance.

The project was promoted by ABI and coordinated by ABI Lab, ABI’s technology competence centre, with a working group composed of 18 pilot banks representing seventy eight percent of the Italian banking sector in terms of employees, with NTT Data as application designer and SIA as infrastructure operator. The platform is the private-permissioned DLT, Corda Enterprise, by R3.

On May 2019, the ABI Executive Committee approved the new interbank agreement that rules the Spunta process and officially paved the path to the production phase for all Italian banks.

What were the main reasons behind the decision to develop this infrastructure in Italy?

ABI Lab started in 2017 with the idea of gaining a 'hands-on' understanding of DLT. On the one hand, we had a promising but still immature technology, and on the other, a burdensome process that required reengineering and standardisation in order to improve. While the new application reshaped the process, we built a parallel infrastructure composed of permission services, nodes, rules, and of course, governance. The infrastructure as well as the governance model can be reused for other use cases.

Could you share the most significant achievements, benefits and lessons of Spunta so far?

At present, there are one hundred nodes geographically distributed in nine different cities, and a hundred Italian banks operate the Spunta DLT daily.

To date, the DLT application has processed 332 million transactions, 98.2 percent of which were automatically matched. Just to compare, Bitcoin’s blockchain managed 117 million transactions in the whole of 2019. The main benefits for the banks are related to transparency, reduction of the operational risk, and standardisation of the activities.

The four key lessons we have learned so far are:
1. distributed technology implies distributed governance;
2. this means that we need to work in sync, as all the banks are sharing the same process and the same single application;
3. the two main streams of the project – technical and process – must always be kept aligned;
4. It is not just about efficiency or making things cheaper or quicker than ever. DLT introduces a new paradigm through software, therefore it is important to leverage it to transform our processes.

What are the next steps for Spunta and more generally for the use of blockchain in Italy’s payment and financial sector in the coming years?

Now we are working at two different levels. First, we are starting with new use-cases that may leverage the same infrastructure, exploring the possibility of adapting the Italian Spunta for cross-border activity. Furthermore, we are working on a new way to share information between banks and employers related to employee loans. Second, we would like to share the benefit of having an entire banking sector on the same DLT infrastructure and the lessons we learnt as an ecosystem to support the possible emergence of a digital euro, if and when the European Central Bank (ECB) decides on it. This is why Italian banks and the ABI, in cooperation with ABI Lab, have started to experiment with the digital euro. The experiment is divided into two work areas: one involving the infrastructure and distribution model to analyse technical feasibility, and the second focusing on programmability to experiment with use-cases that can differentiate the central bank’s digital euro from already-available electronic payments. The aim of the initiative is to proactively contribute to the public debate and support banks operating in Italy as they prepare for the future. 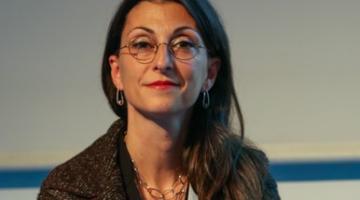 Silvia graduated in statistical science and economics and has worked for ABI Lab Consortium since its foundation 15 years ago. She became Head of Innovation at ABI in May 2019. She has led the Spunta project, an initiative to implement distributed ledger technology (DLT) in the interbank reconciliation process, from 2017 onwards.