Sixty-eight percent of the participants to our poll think the SEPA Ins...

We recently organised on our website a poll open to all, in which we asked the following question: ‘When do you think the critical mass of Instant Credit Transfer transactions will be reached across Europe?’

The results show the confidence of European payment professionals that this new scheme launched on 21 November 2017 will quickly take-off. Sixty-eight percent of the persons who cast their vote think the critical mass will be achieved in 2020 at the latest.

Here are the detailed results: 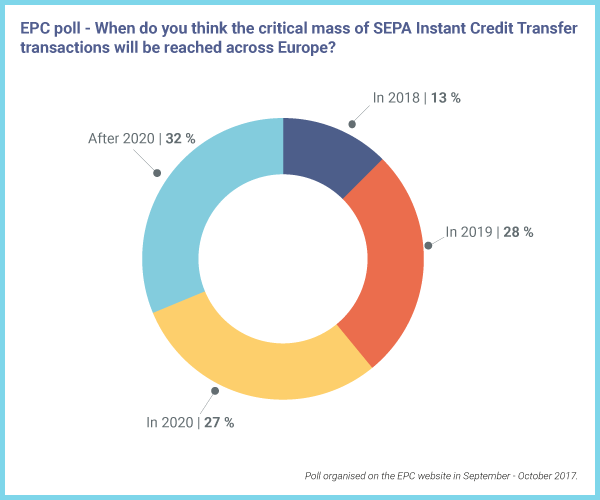 The scheme enables the transfer of up to 15,000 euros in less than ten seconds. For the moment, nearly 600 payment service providers from eight European countries (Austria, Estonia, Germany, Italy, Latvia, Lithuania, the Netherlands and Spain) propose services.

In addition, nearly 1,000 have already committed to offer services by July 2018, and more are expected to join the scheme by 2019. Among them, from Belgium, Bulgaria, Finland, Malta, Portugal and Sweden, and more from Germany and the Netherlands.

We share the opinion of the persons who participated in our poll, and also believe that end-2020 is a realistic target for achieving a critical mass of scheme participants across .

Increasing the geographical reach of the scheme is critical to make it a success. , we invite you to board the instant payment train as soon as possible!

Related Article
Instant credit transfers are now a reality in eight European countries
Related link
View the Register of Participants, last updated on 8 December 2017
Latest News
Around the web – a compilation of some interesting reports about payments published last quarter
EPC calls for independent candidates for its Dispute Resolution Committee
2019 - a year to remember
Public consultation on “Technical Interoperability for MSCTs based on payee-presented data”