The Nordic Payments Council (NPC) developed the first Nordic payment schemes, based on and close to the European Payments Council’s ( ) Single Euro Payments Area ( ) payment schemes. Founded by four Nordic bankers’ associations, it aims to facilitate payments within the Nordic countries and intends to enable easier and faster payments to and from the eurozone. We interviewed Jenny Winther to find out more about the NPC association, its achievements, and further goals.

First, could you briefly describe the NPC, and what led to its creation?

There has been a discussion for several years in the Nordic countries on how to use the new standards and how to relate to the set-up. Even though the Nordic economies are fairly integrated, the national payments markets have had their own traditions and ways of working, making them quite different. In an effort to overcome that, the P27 initiative was created in 2017, and this led to the creation of, on the one hand, the NPC, and on the other, the P27 Nordic Payments Platform, with the aim of creating one common state-of-the-art payment platform for the Nordic countries. The NPC was founded by four Nordic bankers’ associations at the end of 2018 with an official launch in June 2019. It is a non-profit member association open to banks and payment institutions covered by the revised Payment Services Directive ( ). Finland, as a euro country, is already fully reliant on the payment schemes; Sweden and Denmark are planning the implementation of NPC schemes for krona and krone, and Norway is evaluating a possible future NPC scheme implementation.

The main objective for the NPC is to contribute to harmonised payments in the Nordics and, at the same time, harmonise the Nordic payments market with the euro countries. The set-up of the NPC is very similar to the .

What are the main actors involved in the NPC and its activities?

The main actors in the NPC are their members, who consist of the future scheme users. Right now, there are 29 members of the NPC, representing banks operating in the Nordics. The NPC organisation consists of working groups where the members participate in creating new payment schemes and payment-related schemes as well as managing and evolving the current schemes.

What are the main goals and the most significant achievements of the NPC since its launch?

The main goal for the NPC is to create payment and payment-related schemes with rules, processes, and formats for harmonised payments in the Nordics.

During its first year the NPC developed, performed public consultation on and published the first NPC Schemes, NPC Credit Transfer and NPC Instant Credit Transfer Schemes. These will go into effect at the end of 2020 and the beginning of 2021 respectively. There has been a very beneficial co-operation between the and the NPC that has meant that the NPC Schemes are very close to the Schemes. This will ultimately contribute to the goal of harmonising payments not only in the Nordics but across Europe, too.

What are the major projects on which the NPC is currently working or is considering starting in the near future? How do you see the NPC’s cooperation with the in this context?

The NPC will manage and develop the current payment schemes closely following the ’s work and continue the close and much appreciated co-operation between the two organisations.

The NPC is also following work on request-to-pay. Since there is a perceived ambition of making the request-to-pay scheme currency-agnostic in a near future, the NPC’s vision is that the Nordic countries will adhere to this new scheme, which is in line with the vision of harmonising payment handling in the whole of Europe.

The next exciting project into which the NPC is looking is the creation of a confirmation of payee scheme. This scheme would be used to confirm an account and payee before making a payment. There is a huge demand for this in the Nordics since this would help to reduce the number of misdirected payments, prevent fraud, and also increase the substitution of account-to-account payments for paper-based payments.

Finally, a broader question: how do you see NPC evolving beyond the near future?

The vision of the NPC is to harmonise payments in the Nordics and thereby enable competition and innovation in the payments market. At the moment, the payment domain is a very dynamic area with a lot of innovation and initiatives happening. Therefore, there will be many opportunities for the NPC to contribute to a very innovative Nordic payments landscape, and the future will show us how! 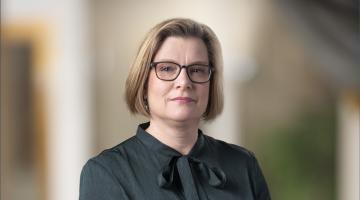 Jenny is the Secretary General of the NPC since it was founded in 2018, has over 20 years’ experience in the payments area. For nine years, she was responsible for payment and clearing products and services at the Swedish clearinghouse, Bankgirot. Prior to joining Bankgirot, she was a senior financial services consultant at CGI (formerly Logica).